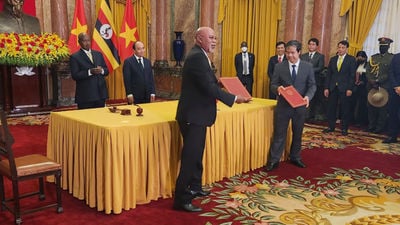 Uganda has signed an agreement to exempt diplomats from visas to Vietnam, signalling intent to relate better with the country.

The two countries signed the deal on Thursday, as President Yoweri Museveni toured Hanoi, becoming the first Ugandan head of state to make an official trip to Vietnam.

Jeje Odongo, the Ugandan Minister for Foreign Affairs explained that the agreement exempts Ugandan diplomatic and service passport holders from visas, allowing the two sides to organise official events or meetings on schedule.

“On our ongoing visit to the Socialist Republic of Vietnam, we have signed three MOUs with Vietnam: diplomatic and service passport visa exemption, diplomatic and political cooperation (and) education and scientific cooperation,” Gen Odongo stated.

The Vietnamese News Agency, however, labelled the deal on visas and political relations as an ‘agreement’ and the rest of the deals as MoUs, which means they could be subject to further discussions and formal agreements.

Frank Tumwebaze, the Ugandan Minister for Agriculture, indicated he had signed an MoU with the College of Agricultural Sciences of Vietnam representing their ministry of agriculture.

Bboxx and Trafigura to accelerate progress on UN SDG 7 in...