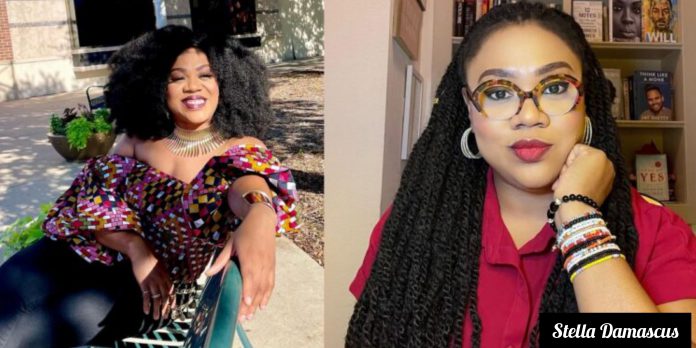 Nollywood Actress, Stella Damasus has taken to her social media page to share her sad experience with Love and heartbreak.
The actress in a post advised women not to rush into marriage, pleading with women to pay attention to red flags in relationships.
According to the mother-of-two she met a guy who ticked all the boxes, had the same interests as her, and did the same things and she believed he was the one so she got herself into the commitment.
However, what she got at the end of the day was heartbreak, referencing Burna Boy’s song as she lightheartedly said ; “Everybody go chop breakfast.”
Meanwhile, some fans/followers of the actress did not agree with her statement and some even accused her of stealing someone’s husband.
Some fans comments below:
Meri wrote ;
After snatching someone’s husband she still chop breakfast 😂 who will play me God of vengeance is fighting my battle for me
Rute wrote ;
Your soulmate but you snatched him from another woman he was legally married to ?? Okay we have heard you.
oladejiajiwe wrote ;
Stella of all people…. Fear no dey catch you? Doris simon will never forgive you for stealing her husband and kidnapping her son for so many years. Abeg look for another proffession joor cos u re a misfit for this.

I don’t need your permission to work for Kenyans: President Ruto...

Kylie Jenner laments the difficulty of her postpartum journey