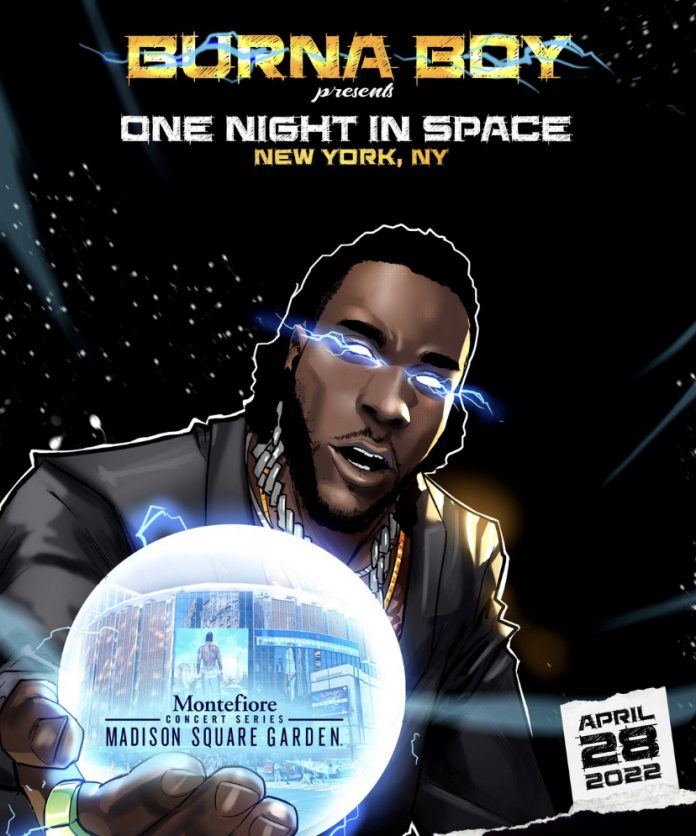 One Night In Space follows Burna Boy’s sold out debut at LA’s The Hollywood Bowl, electrifying performances at 2021 Global Citizen Festival and The Governor’s Ball, as well as sold out international shows at London’s O2 Arena, Paris’ Accor Arena, Amsterdam’s Ziggo Dome and more venues around the globe, as part of his 2021 Space Drift tour.

The groundbreaking Afro-Fusion artist’s 2020 fifth studio album TWICE AS TALLproved an immediate sensation, earning more than 5M worldwide streams within its first hour of release. Fueled by such singles as “Wonderful,” “Monsters You Made (Feat. Chris Martin), “Real Life (Feat. Stormzy),” and “23,” TWICE AS TALL – which features additional collaborations with Youssou N’Dour, Sauti Sol, and Naughty by Nature – debuted at #1 on Billboard’s “US World Albums” chart while receiving unprecedented worldwide critical acclaim.

Among its countless accolades, TWICE AS TALL received the 2021 GRAMMY® Award for “Best Global Music Album,” having already made history as the first time a Nigerian artist received back-to-back nominations in the category (following 2019’s GRAMMY® Award-nominated AFRICAN GIANT). TWICE AS TALL was also named among 2020’s very best by a wide span of global publications, including The New York Times, The FADER, Consequence of Sound, British GQ, NME, Pitchfork, Vice, and Uproxx, to name but a few.

He is currently nominated for the 64th GRAMMY awards alongside multiple Grammy award winning Angelique Kidjo for Best Global Performance on Do Urself.

Alariwo of Africa explains why he has been ‘silent’ in the...

Beatrice Nwaji received N4.5m from fans to mark her birthday