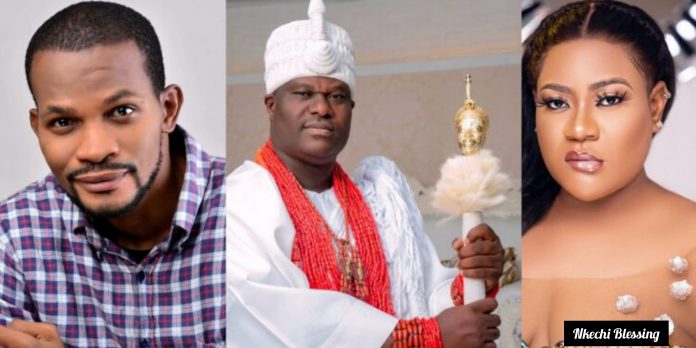 Nollywood Actor, Uche Maduagwu has punched hard on his colleague, Nkechi Blessing after she expressed her desire to become one of the wives of Osun Monarch, Oba Adeyeye Enitan Ogunwusi.
It could be recalled that the Ooni of Ife has been marrying new Wives every week throughout the month of October.
Fairly, the Monarch is currently married to Six beautiful women of high calibre and the king has oftentimes been hailed for his great taste in his women.
However, there are still some rumors and speculations that he’s not done getting married as he will also add more beautiful Queens to his Palace.
The rumors might have triggered Nollywood Actress, Nkechi Blessing to express her desire but it angered Uche Maduagwu so much that he took to his social media page to issue a scathing attack.
Resharing a photoshopped image of Nkechi kneeling beside the Ooni, Uche stated that the Ooni is looking for an Olori and not a radio without battery.
However, the actor added that some actresses don’t “read adverts” properly.