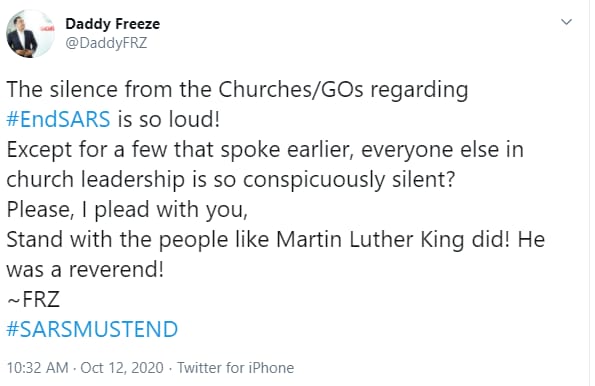 Daddy Freeze threw a hit at churches and general overseers who are yet to show any sign of support for the ongoing #ENDSARS campaign against police brutality in Nigeria.

According to the post on his Twitter page, the media personality, while acknowledging those who have shown their support and stood with the people, he pleaded with those who are still silent to come out and stand for the people like the late Martin Luther King Jr, did for his own people.

His post reads:
”The silence from the Churches/GOs regarding #EndSARS is so loud! Except for a few that spoke earlier, everyone else in church leadership is so conspicuously silent? Please, I plead with you, Stand with the people like Martin Luther King did! He was a reverend! ~FRZ #SARSMUSTEND”