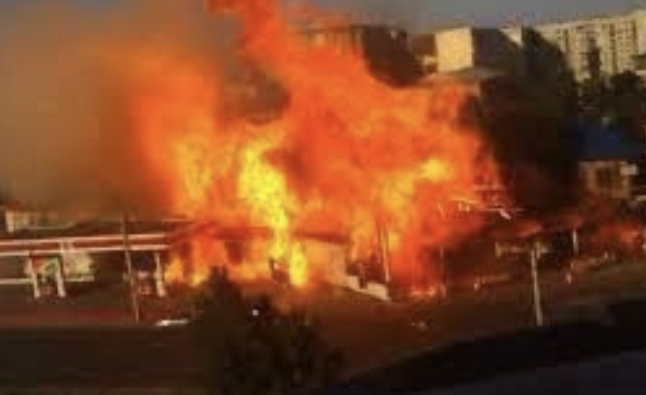 An explosion in Ghana’s rural Western Region on Thursday has killed unknown number of residents and razed hundreds of buildings when a truck carrying explosives to a gold mine collided with a motorcycle.

Unverified videos posted on local media showed a large, smouldering blast site in which buildings had been reduced to piles of wood, brick and twisted metal.

In one video, two bodies are seen crumpled on the ground, covered in dust. A photo shared by a local council member showed a deep crater at the epicentre of the blast, onlookers peering down from its rim.

“The public has been advised to move out of the area to nearby towns for their safety while recovery efforts are underway,” the police said in a statement.

The police have asked nearby towns to open up public spaces including classrooms and churches to survivors, the police said.

The explosion occurred in Apiate between the towns of Bogoso and Bawdie when a motorcycle went under a truck carrying explosives owned by a company called Maxam that was en route to the Chirano gold mine, run by Toronto-based Kinross (K.TO).

Kinross spokesperson confirmed the incident, saying it occurred 140 kilometres (87 miles) from the mine.

The police initially said the explosives were heading from the Tarkwa gold mine run by Johannesburg-based Gold Fields, but a spokesman for Gold Fields said the delivery was from an explosives company in the town of Tarkwa, not the Tarkwa mine. Maxam did not respond to requests for comment.

Ghana President Nana Akufo-Addo tweeted he had been informed of the incident and confirmed there had been deaths.

“It is a truly tragic incident, and I extend, on behalf of Government, deep condolences to the families of the deceased,” he stated.