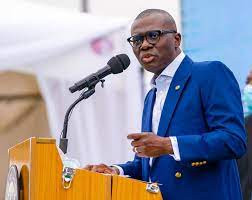 Governor Babajide Sanwo-Olu has won the All Progressives Congress’ (APC) governorship primary in the state which held on Thursday, May 26.

The governor was declared the winner after two other aspirants, former Commissioner of Energy, Wale Oluwo, and former Permanent Secretary from the Ministry of Energy, Mustapha Olorunfemi, were not cleared for the primary.

More than 1,225 delegates were expected to cast their votes in the exercise and 1,198 were accredited. Of those accredited, 1,182 votes were cast with 12 regarded as invalid.

Reacting to the development, Gov Sanwo-Olu on his IG page wrote;

”I am grateful to God, the distinguished delegates and the leadership of the APC for the chance to continue the good work of governance that we have begun in our great state.

“With this resounding victory in the primary election, I am confident that we are united and ready to continue to be a beacon of hope and service to this great state.

“To the other contestants, I congratualte you for being a part of this very democratic process and invite you to join hands with me For a Greater Lagos.”