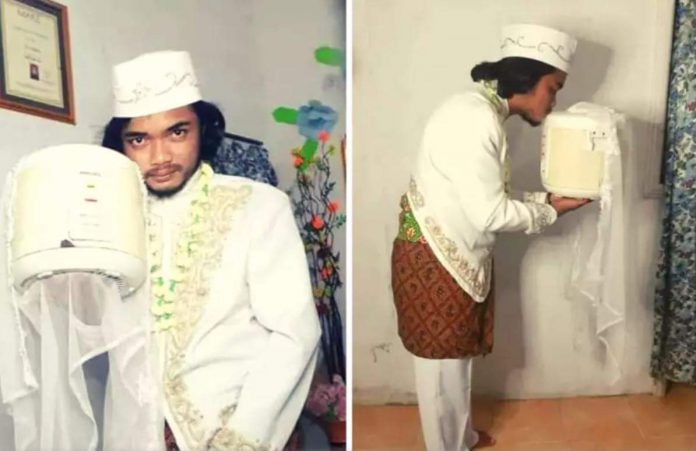 An Indonesian identified Khoirul Anam, created quite a stir on social media by announcing that he married his rice cooker.

Khoirul Anam from Magelang, Java, took to Facebook to announce his wedding by posting pictures of the bizarre nuptial ceremony.

In the post, while Anam was spotted in traditional white wedding attire, his electrical “bride” was dressed in a white veil for the signing of the documents.

In a series of images shared by the man, the couple was seen sitting together for the ceremony as they took the holy oath. He was even pictured sealing the union with a kiss!

Anam went ahead to list the qualities of his ‘wife’ in the caption of the picture: “fair, quiet, obedient, doesn’t talk much, knows how to cook”.

Anam, who is known for pulling eccentric antics on social media, informed his followers that he has divorced his newlywed wife, the rice cooker, just after four days!

He stated that it was a ‘heavy’ decision on his part, he admitted that there is no perfect partner for him.

He wrote, “My decision is round.. heavy indeed.. but this is the way I take.. no perfect partner..”

Among the numerous comments are:

“If it was serious, he would’ve married a Tiger or Zojirushi rice cooker. But a Philips rice cooker? You don’t marry that. That’s just for quick sushi calls,” a user mocked.

While another user stated jokingly, “not everyone can handle the pressure of married life.”

Nnamdi Kanu to appear in court May 18, Defence counsel discloses