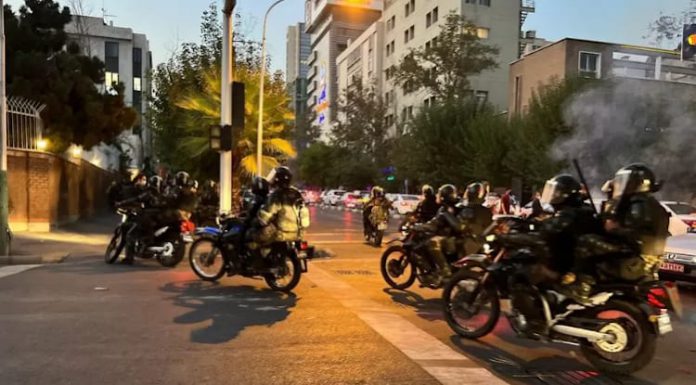 Iran’s president has warned that he will not accept “chaos”, as authorities continue to crack down on protests that have swept across the country since the death in custody of a young woman.

Ebrahim Raisi said Mahsa Amini’s death two weeks ago, after she was detained by morality police, had “saddened all”.

But he added that his government “[could] not allow people to disturb the peace of society through riots”.

Fresh unrest was reported on Wednesday night amid a mounting death toll.

State media have said that 41 people, including security personnel, have been killed and that more than 1,200 have been arrested.

Mahsa Amini, 22, a Kurd from the north-western city of Saqez, was visiting in Tehran on 13 September when morality police accused her of violating the strict law requiring women to cover their hair with a hijab, or headscarf.

The police said Ms Amini collapsed at a detention centre after suffering heart failure. But her family have alleged that she was beaten by officers. She died in hospital following three days in a coma.

The first protest took place after her funeral in Saqez on 17 September, when women were filmed waving their headscarves in the air.

Videos have shown women burning their headscarves and cutting their hair in public to chants of “Women, life, freedom” and “Death to the dictator” – a reference to Supreme Leader Ayatollah Ali Khamenei.

In an interview with state TV on Wednesday night, President Raisi promised that Ms Amini’s death was being investigated transparently and that forensic experts would present a report in the coming days.

When asked about the recent unrest, the hardline cleric and former judiciary chief warned that there was “a distinction between protests and riots”.

“Those who took part in the riots must be dealt with decisively, this is the demand of the people,” he warned.

He also accused “the enemy”, including the United States, of trying to “pit people against each other”.

On Thursday morning, the governor of Tehran province declared that “the recent riots have ended”, despite footage posted online appearing to show people protesting in a number of districts overnight.