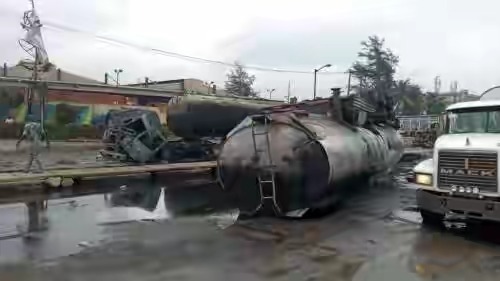 A petrol tanker has reportedly injured scores of persons and burnt 10 vehicles as it explodes at Mile 2, along the Oshodi/Apapa Expressway in Lagos on Thursday.

It was gathered that goods worth several millions of naira were also destroyed by fire.

It was disclosed that the affected truck, which loaded the substance from one of the tank farms along the expressway, was heading outward Apapa.

However, on reaching a failed section of the road, the tanker overturned, spilled its content and went up in flames.

The loud bang rattled some drivers, who were sleeping in their trucks, awaiting the right time to hit the road.

They all fled in different directions for safety.

Unfortunately for some of the drivers of other trucks behind, they could not manoeuvre their ways because of the failed section.

They abandoned their trucks and managed to run for their lives.

It was also said to have affected some trucks on the other side of the road waiting for their turn to drive into the port.

Beninese court orders Sunday Igboho back to police custody after a...