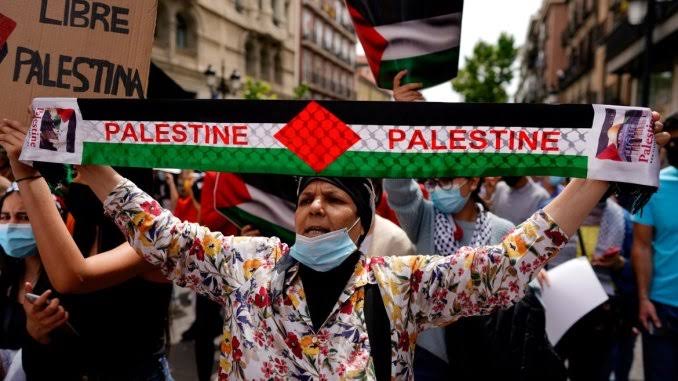 Some 2,000 protestors took part in a demonstration in Dakar, Senegal to lend support to the Palestines, who were battered by Israel in days of bombardment.

At the Nation’s Square in Dakar on Friday, they gathered under Palestine flags demanding the right thing be done.

“We condemn the dishonorable attitude of some countries that rush to support the Israeli executioner, providing him with money, arms, and political support in international meetings to justify Israel’s crimes against humanity”, said Mame Matar Gueye, a Spokesperson for religious organization,’’Jamra’’.

The protesters responded to calls by a group of about 40 religious organizations in this nation, where 95% of inhabitants are Muslims.

They were supported by political and civil society personalities.

“The government has taken the position of siding with Israel. This is what we do not accept because we consider that Israel is doing imperialism to Palestine, with the clear complicity of the international community”, said Protester, Cheikh Aldiouma Ka.

Historically, Senegal is an ardent supporter of Palestinians on the global stage.

In December 2016, the West African nation co-sponsored the Security Council resolution 2334 condemning the Israeli settlement of the Palestinian territories.

Senegal, also has relations with Israel, one of the first countries to recognize its independence in 1960.

Last week, President Macky Sall called for “de-escalation”. In a statement, the government condemned “the use of violence in all its forms” between Israel and the Palestinians.

It reiterated “its commitment to the advent of a viable Palestinian state coexisting with the State of Israel’’.

Morocco 2022: Pinnick Charges Super Falcons To Go All Out For...

Ketanji Brown Jackson Sworn In As First Black Woman On US...