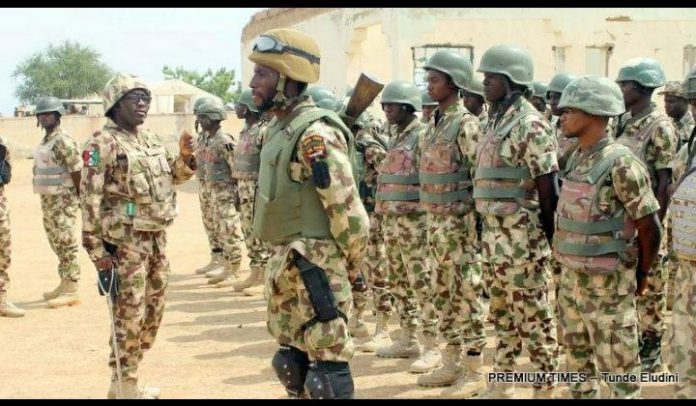 Some soldiers of the Nigerian military were feared ‘critically’ injured when terrorists belonging to the Islamic State of West Africa Province (ISWAP) sect, yesterday, ambushed their convoy, in the North East.

According to a security news platform, (PRNigeria) gathered that the Nigerian troops and their civilian Joint Task Force (CJTF) counterparts, were heading to Kukawa town from Kauwa settlement in Borno State, for a raid operation.

The troops, however, repelled the attack at Kukawa and Gudumbali axis, by ‘gallantly’ engaging the terrorists.

Scores of the ISWAP elements, according to credible intelligence sources, met their waterloo, as they were eliminated during the resulting gun battle with troops.

“The troops, together with unspecified numbers of CJTF were on patrol when the ISWAP insurgents launched an attack on their convoy of seven vehicles,” one of the sources, who pleaded anonymity, said.

He continued, saying: “Though many terrorists were killed, some soldiers were unfortunately grievously wounded during the bloody combat.”

The source, equally said that though three civilian JTF members were declared missing, troops have since launched a search and rescue operation to free the missing CJTF vigilantes.

Meanwhile, a similar attack on Friday by Boko Haram terrorists at Kukareta along Maiduguri-Damaturu Road was successfully repelled by troops.

The security news platform, however, could not confirm whether soldiers were killed during the attack.

Vodafone Ghana recognised as a top employer for 2023 by Top...

Igboho was chained by Beninese police to prevent him from turning...