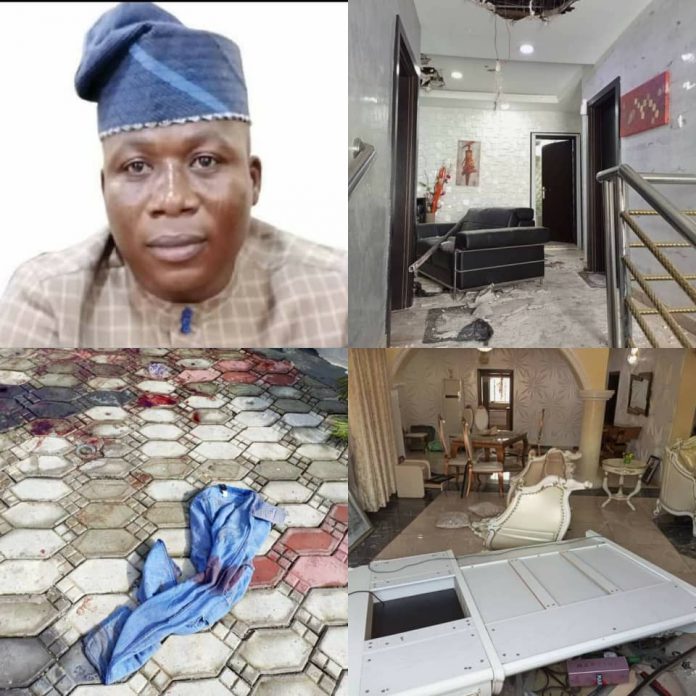 Identified gunmen attacked the residence of the popular Yoruba Nation Agitator, Sunday Adeyemo aka Sunday Igboho in the early hours of Thursday, July 1.

According to the media aide of the agitator, Olayomi Koiki, the gunmen adorning military uniforms carried out the attack at about 1am.

Koiki said during the attack, Igboho’s G-wagon, Prado SUV, some valuable properties including furniture, and windows were destroyed. He said bullet holes were found in cars parked in the premises while bloodstains were seen at the premises.

It was also alleged that some persons in the house including a close ally of Igboho identified as ‘Lady K’, were whisked away.

The state police command is yet to comment on this incident.

In reaction to the attack, Sunday Igboho disclosed that he was at home during the attack.

He stated this during an interview with BBC Yoruba.

“I just heard plenty bullet in my compound and gunshot in front of my house. They were shouting Sunday Igboho come out, we are DSS, we are soldiers, come out!

“So I peeped through the window, and I saw them in DSS uniform and soldiers so I was surprised because I didn’t kill anyone nor fight with anybody, what I’m doing is to fight for me people.

“All the rally I’m doing is a peaceful rally, so I’m fighting for my family too because all the bandits killed my family, raped them kidnapped them and take ransom from them.

“Government refused to do the right thing, that’s why I came out to support my family to fight for our right. So I was surprised.

“Yes, I was in the house when they came. They killed about two guys. The shooting was too much. They destroyed all my properties, all my vehicles.” he explained.

‘Coming To America’ sequel to be premiered in December