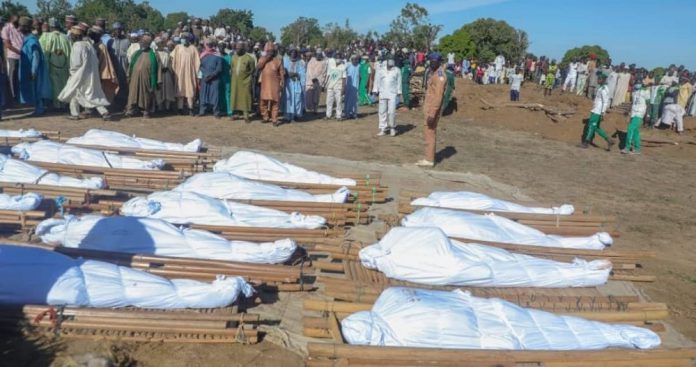 A top UN official has disclosed that at least 110 people were killed in the Boko Haram attack on a farming community in Jere Local Government Area. It was reported that the Saturday attack on mostly rice farmers in Zabarmari, with residents saying at least 43 farmers were killed.

President Muhammadu Buhari who condemned the attack in a Saturday night statement did not speak on the casualty figure.

PREMIUM TIMES reported how the victims were buried on Sunday with residents saying many others are yet to be accounted for.

On Sunday, the UN resident coordinator in Nigeria, Edward Kallon, said the death toll from the attack could be as high as 110.

“I am outraged and horrified by the gruesome attack against civilians carried out by non-state armed groups in villages near Borno State capital Maiduguri.

At least 110 civilians were ruthlessly killed and many others were wounded in this attack,” Mr. Kallon said.

“In the early afternoon of 28 November, armed men on motorcycles led a brutal attack on civilian men and women who were harvesting their fields in Koshobe and other rural communities in Jere Local Government Area.

“I extend my sincere condolences to the families of the civilians who lost their lives in this atrocious attack. I also wish a speedy recovery to those who were wounded in the incident,” he stated.

Mr. Kallon revealed that many women may have been kidnapped by the terrorists during the attack, something the Nigerian presidency kept mum about.

“We have also received reports that several women may have been kidnapped,” he said, calling for “their immediate release and return to safety.”

“My thoughts are also with the rural communities in the area, who are shocked by the brutality of yesterday’s attack and fear for their safety.

“The entire UN system and the humanitarian community working to provide life-saving and development assistance to the most vulnerable in Borno State is outraged by the incident.”

The UN official lamented that Saturday’s attack in Jere was the worst of such incidents this year in the troubled North-east that has suffered from Boko Haram attacks since 2009.

“The incident is the most violent direct attack against innocent civilians this year. I call for the perpetrators of this heinous and senseless act to be brought to justice,” Mr. Kallon said.

“It is, unfortunately, one of too many such attacks targeting farmers, fishermen, and families who are trying to recover some livelihood opportunity after over a decade of conflict.

“I strongly condemn this attack and any act of violence against innocent civilians and I firmly urge all actors on the ground to respect international laws and humanity.

“Rural communities in Borno State are facing untold hardships. Helping them to farmland and rebuild livelihoods are amongst our priorities and the only way to avoid the looming food crisis in Borno State. They and all other civilians need to be protected and spared from any kind of violence.

“Innocent women, children, and men desperately need food and other support and assistance, particularly at a time when we are recording some of the highest levels of food insecurity in Borno State. We owe to do our utmost to help them survive these difficult times.”