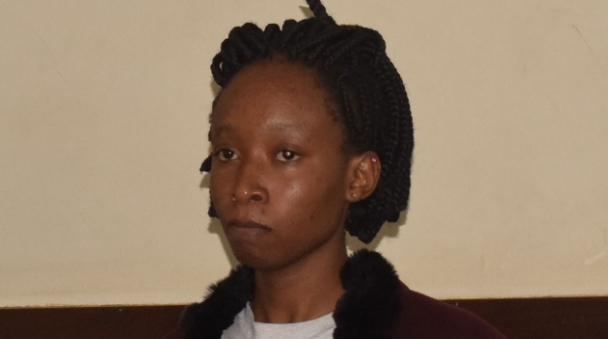 Detectives have arrested a woman allegedly with links to a gang behind a string of robberies and murders in Eastlands area of Nairobi, Kenya.

Jane Owendi Omwinda was arrested on Sunday November 19, 2022 and currently being held at Dandora Police Station where detectives are investigating a violent robbery where an M-Pesa attendant, Regina Wanjiku, was robbed of her four mobile phones.

Omwinda is suspected to be an accomplice of robbery suspects, Danson Musyoka Mulee, Brian Wambua Mbindyo, John Mutiso Makau, Patricia Mulumba and Evans Omondi who have been arrested by the DCI’s Criminal Intelligence and Research Bureau (CRIB) detectives in connection with the robberies.

They are also suspected to have murdered Nicodemus Munyasya, 38, who was shot dead in Savanah, Donholm estate in Nairobi on October 31 while walking home after visiting a bank.

Munyasya had deposited a cheque at Family Bank in Donholm when the gangsters trailed him on a motorbike, shot him dead and took a bag containing disposable cups thinking it was money.

The suspects shot Ms Wanjiku twice on her feet during the robbery in Umoja 3 estate and the robbery was reported at Mowlem Police Station.

He was as a forgiving person, caring husband: Magoha’s wife Barbara

Code of conduct for digital media practitioners: A tool to promote...