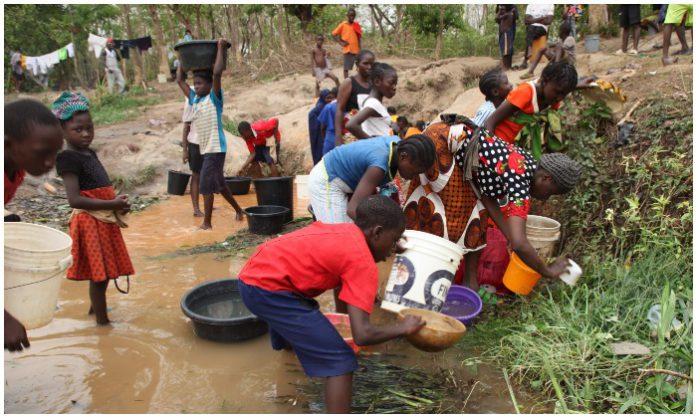 A 2022 report by the World Bank has revealed that approximately 70 million Nigerians had no access to basic drinking water services and 114 million were without basic sanitation facilities in 2021.

The report titled, ‘Global Water Security & Sanitation Partnership’ showed that access to piped water declined from 36 per cent in 1990 to 11 per cent in 2021.

The report read in part:

“In 2021, approximately 70 million Nigerians had no access to basic drinking water services and 114 million were without basic sanitation facilities. Access to piped water declined from 36 per cent in 1990 to 11 per cent in 2021. An estimated 19 per cent of Nigerians practised open defecation in 2020, and faecal sludge is commonly released untreated into the environment.

“Urban water utilities largely fail to meet the needs of their already small customer base, forcing a majority to rely on expensive and often unsafe alternatives, such as private water vendors and shallow private wells.

“In 2016, water quality testing at a national scale revealed that over three-quarters of the population used contaminated water sources, and that nearly half used sources that were at very high risk of faecal contamination.”

The report, however, noted that GWSP provided significant assistance to support the government’s commitment to reform and build government capacity.

Meanwhile, a Professor of Public Health, Tanimola Akande, said it was unfortunate that access to safe drinking water was a big challenge in Nigeria.

“Access to basic drinking water means getting water from an improved source that is accessible at home, available when needed, and free from faecal and chemical contamination.

“Poor access to safe drinking water leads to several diseases, mainly diarrhoea diseases. The burden of these diseases is high in Nigeria. It is also responsible for a significant number of deaths.

“To improve the situation everyone has a role to play. At the household level, people should make an effort to have access to water through various water sources and treat the water at home for safety,” Akande said.

No underage person will vote in 2023, INEC affirms