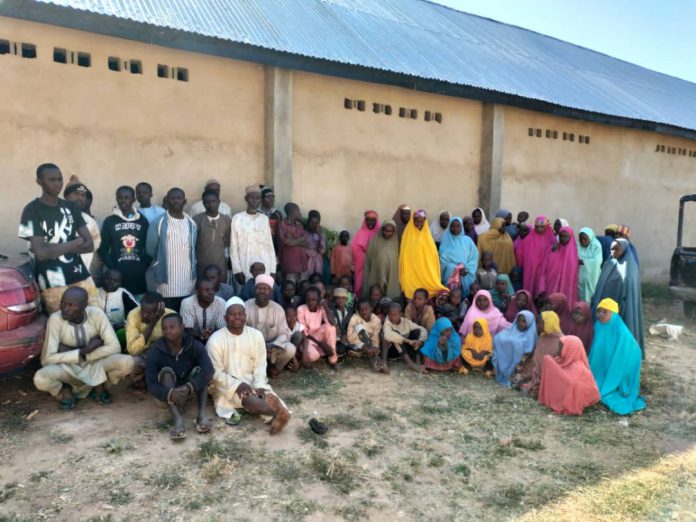 A team of policemen and soldiers have reportedly rescued 76 passengers kidnapped by bandits along Funtua-Zaria Road at Gulbala area of Giwa Local Government Area of Kaduna state.

Spokesperson of the State Police Command, DSP Mohammed Jalige, who disclosed this in a statement on Monday, November 21, 2022, said the victims were passengers from Sabon Birni LGA of Sokoto State.

According to the PPRO, the victims were rescued on Friday, November 18, when the Police Divisional Headquarters, Giwa, received a report that a large number of bandits wielding sophisticated weapons blocked the section of the road to abduct innocent commuters.

The police and military were immediately mobilised to the location to dismantle the road blockade, root out the armed miscreants and rescue any victim they may have abducted.

He said on reaching the location, a Ford open truck with Reg. No. APP 667 XG was found and information garnered had it that a large number of passengers on the truck had been moved off the road by the bandits.

“On November 18, at about 2300hrs, the Divisional Police Headquarters in Giwa received reports that a large number of bandits blocked a section of Funtua-Zaria Road at Gulbala area of Giwa LGA and abducted many commuters.

EFCC responsible for my travails in London – Ekweremadu tells Federal...