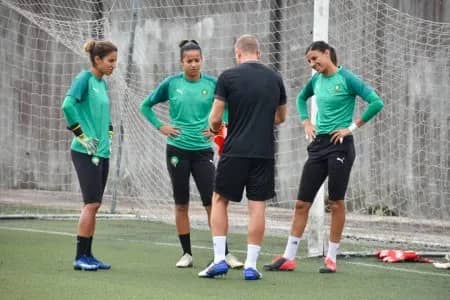 Atlas Lionesses of Morocco in training at the Legacy Pitch inside the National Stadium, Lagos on Monday.

Expectedly, invited countries for the Lagos 6-Nation Invitational Friendly Matches tagged Aisha Buhari Cup have arrived Nigeria even as the Radisson Hotel camp of the Super Falcons have continued to swell like a balloon.

As at the time of this report, Atlas Lionesses of Morocco who touched down in the early hours of Monday have settled in and even had light training session at the Legacy Pitch inside the National Stadium, Surulere  later in the day.

Also in town are the Les Aigles of Mali and Black Queens of Ghana who jetted in the same time for the mini-competition. They have all been checked into the teams hotel in Victoria Island.

It was reliably gathered that the rest of players are expected to join the camp before dinner time on Monday or breakfast on Tuesday ahead of full training under the supervision of Head Coach Randy Waldrum and his assistants, Ann Agumanu-Chiejine and Wemimo Mathew.

Nigeria’s resolve to remain one is unshakable – Lai Mohammed asserts

Our leaders sold us out with poor pay rise negotiation –...