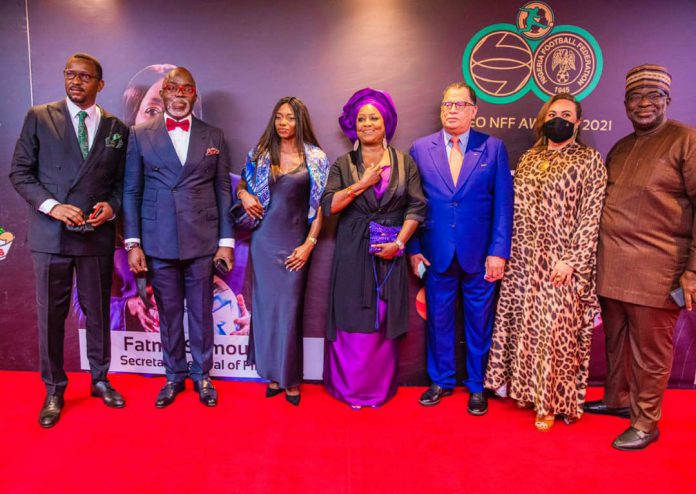 The third edition of the annual NFF-Aiteo Football Awards took the City of Lagos by storm on Monday night, with the country’s First Lady, Dr (Mrs) Aisha Buhari, as well as four-time African Player of the Year Asisat Oshoala, home-based professional Gift Monday and the Super Falcons’ class of 1999 the star attraction at the glamour event inside the Eko Hotels & Suites, Victoria Island.

President of the NFF and FIFA Council Member, Amaju Melvin Pinnick heaped plaudits on Dr Aisha Buhari, in whose name the six-nation invitational tournament concluded on Tuesday in Lagos was held, and disclosed that her passion, interest, attention and commitment to the challenges confronting women, the girl-child and the less privileged in general motivated the Aisha Buhari Cup event. The First Lady was honoured with the award of Best Supporter of Women’s Football.

Silas Nwankwo and Charles Atshimene, who shared the honours of top scorer in the last NPFL season with 19 goals, were joint winners of the Best Performance of the Year (Men; Nigeria-based) while Paul Onuachu emerged Best Performer for the overseas-based crew. Super Eagles’ forward Onuachu scored 35 goals in 41 games for his Belgian club Genk and two crucial goals in the Super Eagles’ successful qualifying campaign for the 2021 AFCON finals.

Lagos State was honoured with Host State of the Year and Edo State was recognized with Award of Commitment to Women Footbal Excellence.