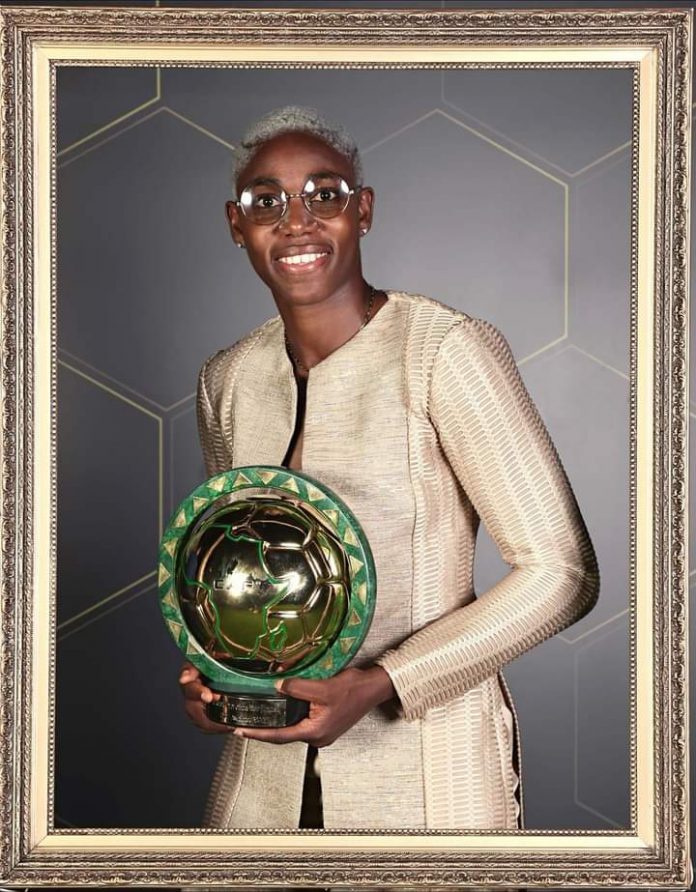 Former Super Falcons captain, Asisat Oshoala made history when she became the first African player to win the Africa Footballer of the Year Award a record five times.

In Rabat, Morocco, Oshoala saw off Cameroon’s Ajara Nchout Njoya and Zambia’s Grace Chanda to win the coveted award again at the CAF Awards 2022 in the Moroccan capital.

The FC Barcelona Femini attacker who had previously won the crown in 2014, 2016, 2017 and 2019 dedicated her record fifth CAF African Player of the Year award to her Nigerian Super Falcons teammates, who she hailed as the best international team in the world.

In so doing she now goes clear of compatriot Perpetua Nkwocha, standing alone on five African Player of the Year titles. She also beat Yaya Toure of Ivory Coast and Samuel Eto’o of Cameroon both of whom have won the Africa Footballer of the Year (men) four times each.

Asisat with her 5th Africa Footballer of the Year Award in Rabat, Morocco
CAF President Dr Patrice Motsepe presented the award to the Super Falcons and and former Liverpool and Arsenal star, who was overjoyed to yet again hear her name called to receive the prized trophy reserved for Africa’s best player.

“I had to fight hard to get to this point. I would like to thank all my teammates and my friends at my club FC Barcelona. Muchas gracias.

“I also have to thank my friends in the national team. You are the best teammates in the world. in football, there are many lessons and I would like to send a message ‘we can fall back, but we can get back up’,” said Oshoala in hailing the courage shown by the Super Falcons after being reduced to nine men to still take their semifinal against Morocco all the way to the penalty shootout.

Oshoala later joined the Super Falcons camp on Friday evening ahead of the bronze match against Zambia by 9pm.

The former Rivers Angels player missed out in the quarter-final match against Cameroon as the Super Falcons qualified for the next edition of the FIFA Women’s World Cup after reaching the semi-finals of the WAFCON in Morocco.

At club level, Oshoala also reached the final of the European Champions League with FC Barcelona.

“I am at the hospital making my monthly visit”- Brazil legend, Pele reacts to health rumor

Germany beat Costa Rica but bow out of world cup

Dlamini-Zuma calls for Ramaphosa to step aside over damning Phala Phala...

Pele: Brazil legend in hospital but daughter confirms ‘no emergency’