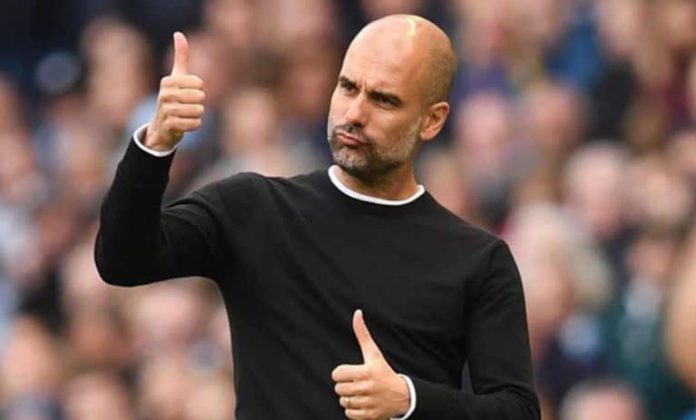 Pep Guardiola believes that his Manchester City side will need to be at their best if they are to beat Atletico Madrid in the Champions League quarter-finals.

After beating Sporting Lisbon 5-0 on aggregate in the last 16, the Citizens will now test themselves against Diego Simeone’s men, who progressed to the last eight courtesy of a 2-1 aggregate victory over Manchester United.

Since the draw was made on Friday morning, Guardiola’s has heaped praise on Simeone, suggesting he will ‘never be sacked’ by the La Liga holders, and he believes it will be difficult for his City team to impose their style on their Spanish counterparts, with a clever approach required to defeat them.

“Simeone won’t be sacked, all the players know who is the manager. If it doesn’t work, no manager can sustain a team like Atletico. Everybody knows what is their path and what they have to do. They were incredibly consistent last year,” Guardiola told reporters at at press conference.

“They went through an incredibly tough group stage with Liverpool, Porto and Milan and the game against United over 180 minutes they were better. Second leg away, more complicated, but the best eight teams are in Europe, all draws are difficult.

“We will try, knowing it will be difficult to impose our game against them. We have to be clever, we know they will have it, have the chances to score.

“It doesn’t matter if we play another opponent, it would be difficult too. We go to a nice stadium, incredible stadium and we go to try and reach the semi-final, hopefully they are worried to play against us.”

Man City, who have never faced Atletico before, will host the first leg at the Etihad Stadium on April 5 before travelling to the Wanda Metropolitano for the second leg on April 13.

Krugersdorp rape horror – why are cops only acting now...

Lewandowski: My Era At Bayern Is Over