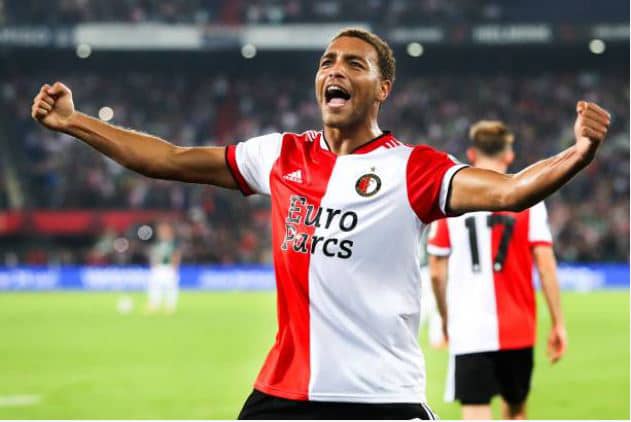 Super Eagles forward Cyriel Dessers says it is a ‘nice achievement’ for him to equal the goalscoring run of Bayern Munich’s Robert Lewandowski and Manchester United’s Cristiano Ronaldo in European competitions this term.

Dessers netted the opening goal on Thursday in Feyenoord’s 3-1 win over Partizan Belgrade, which saw the Dutch side secure an 8-3 aggregate victory and advance to the quarterfinals of the Europa Conference League.

The 45th-minute goal was Dessers’ sixth in five consecutive appearances in the competition, placing him on the same footing as two of football’s finest strikers.

According to Opta, Dessers is the fourth player to score in five consecutive matches in the Champions League, Europa League, or Conference League this season. The Feyenoord number 33 has matched the tally of Bayern’s Lewandowski and United’s Cristiano Ronaldo and only two goals behind Ajax’s Sébastien Haller.

The Nigerian international is delighted to have joined such an elite group of players. And with Feyenoord still in the competition, the 27-year-old is looking forward to surpassing the trio.

“In itself a nice achievement, I think,” Dessers said, as per Voetbalzone. “Although I have to thank Jens (Toornstra) today. I can always use an extra goal to work on my statistics.

“There have already been beautiful and less beautiful ones, for it may take me a little longer. Let’s hope I can be alone in a row soon.”

Dessers will aim to continue his brilliant scoring run when Feyenoord face Peter Olayinka’s Slavia Prague in the next round.

Security of Africa’s high seas critical to global security – US...

Why Bruno Fernandes winning PFA Player of the Year award would...