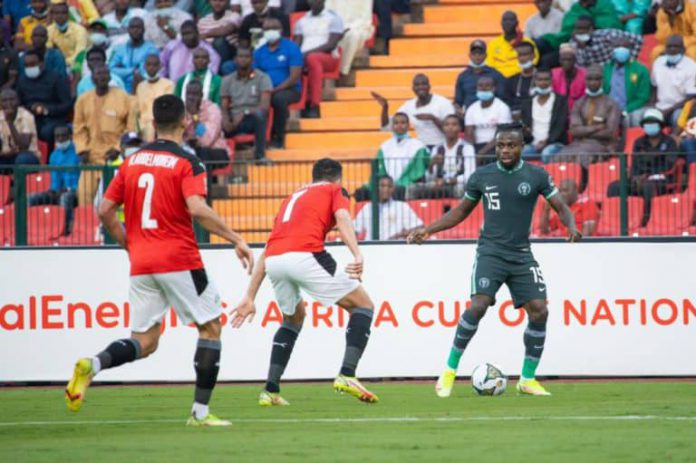 Nigeria winger Moses Simon insists the Super Eagles have “still got a lot to prove” despite their flying start under Augustine Eguavoen, which has put them favorites for the African Cup of Nations title.

Nigeria are the only side to have won their three group games at the continental showpiece in Cameroon, including a victory over Mohamed Salah’s Egypt.

But Simon says the West African nation – who face Tunisia in today’s round of 16 fixture – should not become complacent following such bright performances.

“We are not the ones calling ourselves the favourites and winning three matches on the bounce doesn’t change the fact that we can improve,” Simon told BBC Sport Africa.

“Personally we know that we’ve still got a lot to prove because big teams like Algeria and Ghana have been sent home early, so that is a sign not to get carried away.

“Some people are already underestimating Tunisia but they are here to also fight for a place to be in the quarterfinal and I’d rather we play them as the underdogs than approach it like favourites.”

Simon admits the Nigeria camp in Garoua, northern Cameroon, is a happier place to be when results are good and says interim manager Augustine Eguavoen has offered more freedom which means the players are keen to make an impression.

He said: “We cannot forget the foundation laid by the former coach [Gernot Rohr] because he also gave majority of the players here a chance to play for the country. It’s always a dream come true to play for Nigeria. There’s always a huge passion and desire to do well for your country and enjoy the plaudits but we must be careful. We have not won anything yet as a team in Cameroon.”

Biden to host PM Modi for state visit in June or...