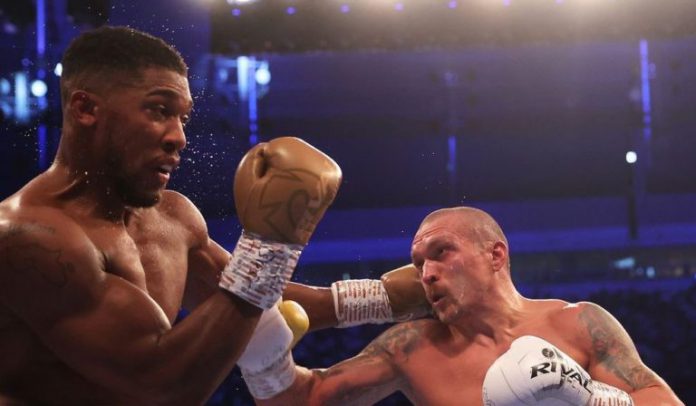 He is in talks to accept stepaside money to let WBA, IBF and WBO champ Usyk, 35, fight bitter rival Tyson Fury for his WBC crown and iconic undisputed status instead.
But he claims a lucrative deal to sit out and eventually fight the winner is not on his radar.

He told lifestyle magazine Stuff: “I’ve come up short twice, but the majority of times I have overcome many obstacles.

“Next fight I’m going to beat him (Usyk) and I’m going to take those belts from him.
“And I’m going to reign again to become three-time heavyweight champion of the world – whether people like it or not.”
Joshua – who avenged his 2019 TKO loss to Andy Ruiz Jr – has split from long-time mentor and Team GB mastermind Rob McCracken and is set to unveil a new regime.

The Watford ace visited a string of American gyms following the Tottenham loss and recently returned from a warm weather camp in Dubai where he did a session with ring legend Floyd Mayweather. He confirms the crippling disappointment of losing his titles for a second time is the driving force for such drastic change.

He said: “As I only fight once or twice a year, I have to stay busy and active in the gyms.
“But because I took a loss in my last fight, there’s been a lot of reconstruction happening in my team.

“So I’ve approached training with more of a mental approach, looking at ways I can improve rather than just jumping back in the deep end from a physical point of view. “I’m not happy about what happened previously because that’s a competitor’s mindset.

“You have to be angry at losing, it’s not acceptable. So now it’s about driving forward. “One thing people know about me is that I bounce back and I don’t take losses. I fight the best consistently – that’s always been a part of my DNA.”

After both defeats, AJ’s critics have accused the gentleman of accepting defeat too easily.
But he revealed the agony he puts himself through after taking a beating and being left out in the championship cold, hopefully temporarily.

Joshua said: “After the loss, I had to give myself four or five days. “I was doing a lot of recovery stuff like ice baths and cold showers, stretching and physio.

“Other people only see the fight, but in my case there’s years of training to lead up to that point. “So it’s not just the fight but all that physical battering that I’ve got to recover from as well.”

Handball rule under the microscope again as fans fume over AC...