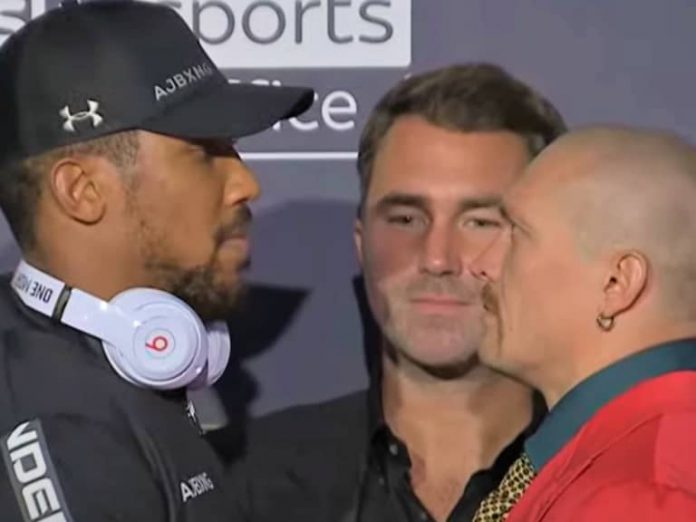 Eddie Hearn has revealed it will take approximately £40million for Anthony Joshua to let Tyson Fury fight Oleksandr Usyk before him. AJ suffered a crushing loss to the Ukrainian at the Tottenham Hotspur stadium back in September, leaving fans stunned.

The Brit wasted no time invoking his rematch clause, with the fight estimated to take place next spring.

Following his epic win over Deontay Wilder in October, Fury, who appeared to be facing Dillian Whyte next, now has Usyk in his sights with the intention to become the undisputed heavyweight champion.

Should a blockbuster fight between Usyk and Fury take place, the winner would defend all the heavyweight titles against Joshua.
Usyk’s promoter has also claimed his man would ‘be happy’ to fight Fury if Joshua agreed, while Hearn has admitted that could happen to Boxing King Media – but only for a significant fee.

He said: “We’ve had their team reach out to us. “Seven figures? A million? If you want to get him not to fight Oleksandr Usyk you have to times that by 40…”

Hearn added: “At the moment there is communication between the two teams to say is it something… and the answer is AJ has not been spoken to about this yet.
“I’ll deal with it and when I feel there’s an opportunity for Anthony and 258 [Management] we’ll sit down with them and present it to them but I won’t do that until it’s the right opportunity. “If there’s a route and an offer and it makes sense then we’ll see but right now, it’s just conversations between the camps.

“At the moment Anthony Joshua is fighting Oleksandr Usyk and that’s the situation.”
Talks are not even in their infancy yet for that fight to happen with Express Sport learning that Joshua has yet to receive a formal offer.

However, Joshua’s camp have made it clear that they would consider an offer if one was put forth to them.

A source in Joshua’s camp insisted they are solely ficused on the rematch. “AJ is a boxer who does smart business, but it’s not dependant on finances,” they said.

“It is more dependant on how things could pan out for us. But we’ve not received any offers yet. “Yes we would consider one, we’re not a closed book and we’ll never be a closed book, but right now we’re planning for the rematch.

“Tell Usyk’s promoter to focus on the rematch. “We’ll listen to the offer if one is made and we will put our recommendations and suggestions to Joshua – as will Eddie Hearn – and then make the best decision for Anthony.”