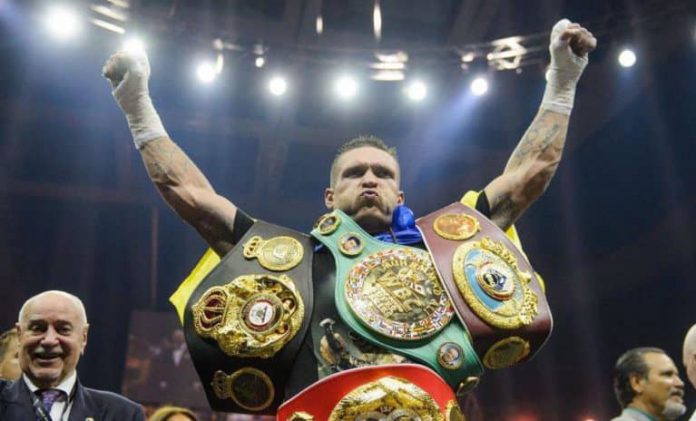 Former world heavyweight champions, Vitali and Wladimir Klitschko, have backed Oleksandr Usyk after he left the front lines in Ukraine to defend his own title.

Usyk has made the difficult decision to leave his combat unit in the fight against Russia, to prepare for his heavyweight rematch with Anthony Joshua this summer.

But he will hearten by the support of Vitali, the mayor of Kyiv, and his brother, Wladimir, who has also taken up arms to defend his city.

However, as reported by Sportsmail, Usyk left Ukraine last week after being given permission by their ministry of defence. And now, the Klitschko brothers, who dominated world heavyweight boxing from 2004 to 2015, have endorsed Usyk’s decision and insisted that the publicity he will generate for Ukraine in the months ahead will be crucial in the country’s struggle for survival.

‘A very important message could be carried through an event like this,’ insisted Vitali, who has been the mayor of Kyiv since 2014 and is one of the most prominent politicians in the country’s battle against Russian aggression.

‘We do not know if in three months we will exist. I actually have plans to speak to Oleksandr Usyk to give him advice if he decides to make the fight, to have some special messages that he can put out there,’ added the former boxer, 50, who held the WBO World Heavyweight title from 1999 to 2000 and the WBC title twice between 2004 and 2013, in an interview with the Telegraph.

Last week, Vitali, or Dr Iron Fist, as he was known in the ring, took time to thank Mail readers for their support of Ukraine. Mail Force appeal has so far raised £8.5million for Ukraine’s refugees.

While able-bodied men aged 18 to 60 are under orders to stay within the borders and fight for the country, Usyk has been granted an exemption ‘in the national interest.’

Usyk is contractually obliged to meet Joshua for a second time in his next contest, having ripped the IBF, WBA and WBO heavyweight titles from his grasp back in September.

Parts of Tembisa plunged into darkness after substation torched

EFF Calls for Bain & Co to be banned in South...

Hannibal Mejbri signs new Man United deal, but who is the...