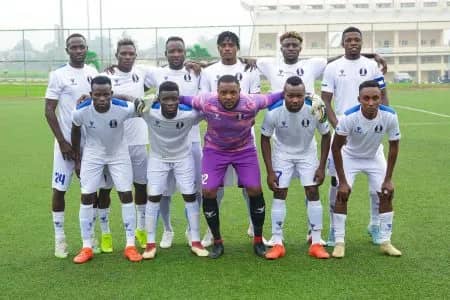 He maintained that the promotion is in line with his campaign promise to get the Oluyole Warriors promoted to the elite league within two years of assumption of office, stating that the commitment and patriotism of the players and management are highly commendable.

3SC, on Saturday, defeated Ekiti United FC 6-0 in the final game of the Super Eight, to wrap up the Super Eight League as winners of the Group B Conference.

The team had earlier defeated Bendel Insurance 2-1 and played 1-1 draw with Remo Stars FC to scoop a total of seven points to top Group B.

A statement by the Chief Press Secretary to Governor Makinde, Mr. Taiwo Adisa, quoted the governor as praising the doggedness and resilience of the 3SC players and coaching staff, who have presented a golden gift to the people of Oyo State.

“We are sincerely happy to see our darling team, 3SC, back where it belongs: the Nigerian Premier Football League.

“It gladdens my heart that the feat is achieved just a few days after we unveiled the remodelled, world-class Lekan Salami Sport Complex, Adamasingba, Ibadan, the befitting home of the Shooting Stars.

“I rejoice with the government and good people of Oyo State on this wonderful achievement by our darling team and especially the return of good football to Ibadan.

The latest on Giovani Lo Celso ahead of Tottenham vs Dinamo...