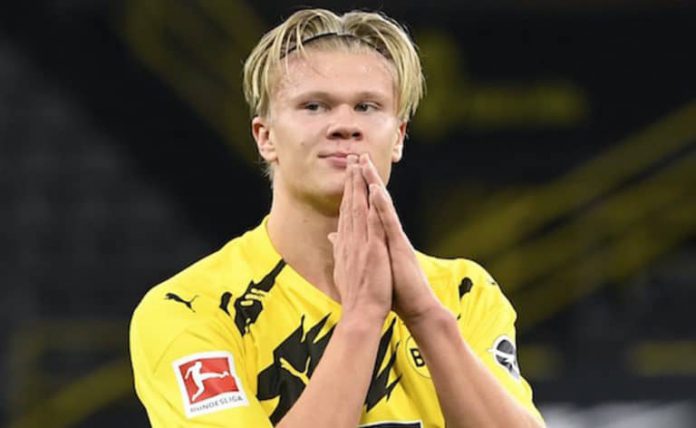 Manchester City is reportedly planning an ambitious bid to land Erling Haaland from Borussia Dortmund in the summer.

Haaland will be one of the major targets for Europe’s top clubs when a reported £68million release clause in his contract becomes active at the end of the season.

The 21-year-old’s reputation continues to grow, having bagged 23 goals in just 20 games already for Dortmund this season.

Real Madrid remains favourites in the race to convince the striker to leave Dortmund, as the Spanish giants hope to pair him up with Kylian Mbappe to form a huge strike partnership.

The Frenchman is poised to leave Paris Saint-Germain in the summer when his contract expires and has been a long-time target for Madrid. But now City’s pursuit of a goalscorer means they are also weighing up a move for Haaland.

According to the Athletic, they will do all they can to tempt Haaland into a move to the Etihad Stadium, even though they are aware the Norway international has his eyes fixed on a Bernabeu move.

The report added that City would be trying to change Haaland’s mind in the coming months. City’s Haaland interests remain despite signing Julian Alvarez from River Plate for £17million during the January transfer window.

But given he has been allowed to remain in Argentina for now suggests the club do not think he is immediately ready to carry the burden of leading City’s attack.

Pep Guardiola has been looking for a striker to replace the club’s record goalscorer Sergio Aguero since the Argentine departed on a free transfer last summer, leaving his team short in attack.

Review: Legleisah Bedouin Cuisine Brings a Mouthful of Generosity in Every...