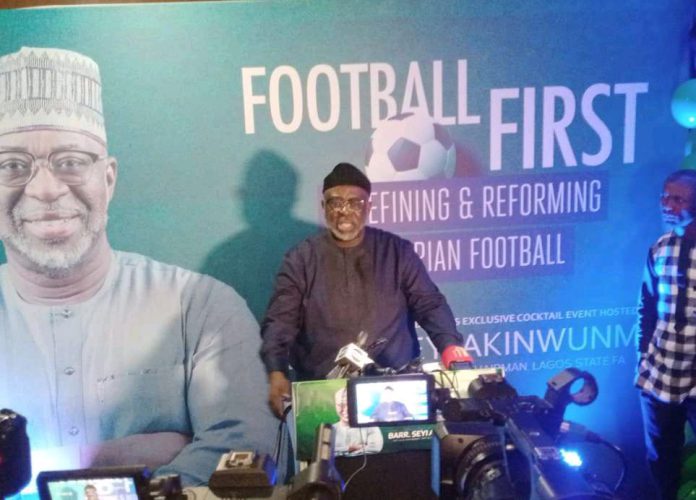 Lagos State Government has thrown its weight behind the Lagos State Football Association Chairman, Seyi Akinwunmi on his ambition to become the next Nigeria Football Federation (NFF) President.

This was made known by Commissioner for Information in Lagos State, Gbenga Omotosho, who was one of the dignitaries at the Seyi Akinwunmi declaration for NFF President .
He said the state was proud of his candidature and his vision and mission to lift Nigeria football beyond its present state .

“Lagos State is proud of you and what you stand for. We are convinced that with your zeal, experience and candor, you will take Nigeria football to where it ought to be when you become the President.”

Speaking at the event, the First Vice President of the NFF, Barrister Seyi Akinwunmi on Saturday promised to give his all in an attempt to take football to greater heights in the country.

Akinwunmi who was speaking at Bagauda Kaltho Media Centre in Alausa, Lagos, during his declaration for NFF Presidency election stressed that he was well-equipped for the job based on his experience and various positions held in the running of football in the country.

Akinwunmi said: “I have high respect for all others contesting for the same position but no one can boast of the kind of experience I have over the years in the game.

“I am well equipped because from the bottom, I climbed up the ladder with wealth of experiences in various areas of the game. I am ready to bring my all to make the game get better.”

The Lagos Football Association Chairman also added he would use his four cardinal pillar programme to run the game.

“The four pillars are Grassroots Development, Business of football, Infrastructure and Technology. I will now use these to actualize my 11 strategic actions for the development of the game.

“It is important to think about the schools and the grassroots for us to move forward. We will have National Finals which will see football competitions at the state and zonal levels. The FAs will be empowered in concrete terms to stage events and create competition among the youth”.

League Reforms, youth development, entrepreneurship, Inclusion, Life after retirement, Girls and Women football, transparency and national team administration are some of the strategic plans of Akinwunmi.

Earlier, President of Nigeria Referees Association, Tade Azeez, noted that Akinwunmi had all it takes to take the game to another level in Nigeria.

Asaba 2022 Will Produce Athletes For Next Paris 2024 Olympic – Dare

Djokovic Denied Entry Into Australia Due To Visa Issue