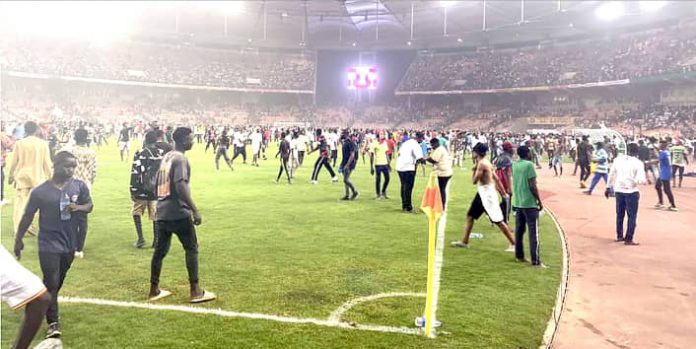 World soccer ruling body, FIFA has set in motion an investigation the pitch invasion that occurred after the Nigeria-Ghana World Cup qualifier played at the Moshood Abiola Stadium in Abaja.

According to bbc.com FIFA told BBC Sport Africa that it is analysing official match report, and will then decide if action will be taken against the Nigeria Football Federation.

“The relevant information included in the match reports will be evaluated by the competent disciplinary bodies before deciding on the next steps to be taken,” a FIFA statement added.

Reports had emerged on Thursday that FIFA had indefinitely banned Nigeria from hosting international matches at the newly renovated Moshood Abiola National Stadium turf but it is believed that a conclusion of the investigation would define the weight of sanctions against Nigeria for the breach of security.

Only on Thursday, Nigeria’s Sports Minister, Sunday Dare said he had set up two committees to investigate the cause of the pandemonium at the Stadium.

Meanwhile, another report emerged that he Video Assistant Referee (VAR) equipment installed in Abuja during the World Cup play-off between Nigeria and Ghana earlier this week is nowhere to be found.

According to the reports which trended on social media, the VAR equipments mounted on the day has not been accounted for as investigations are currently ongoing.

Thus, the stolen equipment has been linked with the rowdy fans that caused trouble at the end of the Nigeria v Ghana game.

Ghana pipped Nigeria with a low shot from Arsenal midfielder Thomas Partey to give the Black Stars a sweet lead that was soon canceled out after Ademola Lookman was fouled in the box by Denis Odoi.

It took VAR to call the centre referee’s attention to the monitor to give the penalty.
Captain William Troost-Ekong stepped up and sent Joseph Wollacott the wrong way to pull both sides level.