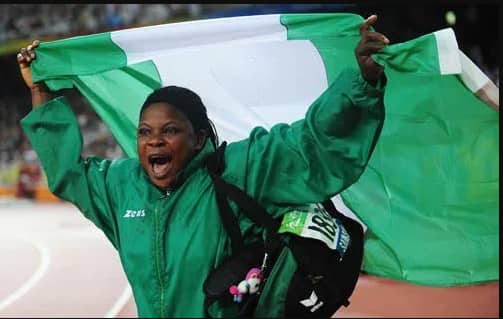 Team Nigeria is now the leading African team on the medals table at the ongoing Commonwealth Games with an additional gold medal on Saturday.

At the end of Day 8 at the Commonwealth Games in Birmingham, Team Nigeria crawled behind South Africa in the eighth position, with a total of seven Gold, three Silver, and six Bronze medals, making a total of 16 medals.

However, on Saturday, Day 9, Nigeria’s athletes continued and dominated the Women’s F55-57 Shot Put event where Eucharia Iyayi won the gold, while Ugochi Alam settled for the bronze.

Iyayi did not just win the gold, she did it in style; setting a new Commonwealth Games Record with a 10.03 throw.

Team Nigeria had up their ante with two gold medals and a bronze from the wrestling match on Day 8 of the ongoing 2022 Commonwealth Games in Birmingham.

Odunayo Adekuoroye defended the title she won in 2018 at the Gold Coast with a dominant performance in the women’s 57kg class.

With 7 gold, 3 silver, and 6 bronze medals, Team Nigeria remains in 8th place on the Medal’s Table.

10th edition of Rhythms On Da Runway launched in Accra