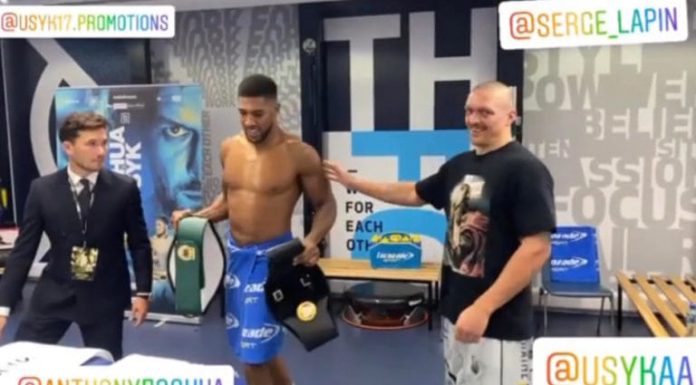 World heavyweight champion Oleksandr Usyk has outlined his plan to retire after three more fights as he wants to spend more time with his children. The 35-year-old Ukrainian turned professional nine years ago and has an unbeaten record of 20 wins, but wants to fight Tyson Fury to unify the heavyweight division before he hangs up his gloves.

Usyk has also been linked with fighting Canelo Alvarez who has been world champion at four different weight categories but says that would be a ‘freak fight’. “I can fight three times more at the very best, said Usyk on his YouTube channel.

“It’s a realistic perspective for my top form. With Tyson Fury, Canelo Alvarez, and a farewell fight at Olympiyskiy (National Sports Complex in Ukraine). With Canelo, he said he wanted to fight me. It would be a freak fight just for the sake of earning money. People say I’m a freak.”

Usyk is currently awaiting the negotiations between Fury and previous opponent Anthony Joshua, and said he will attend their fight in person if it happens, ahead of a bout against the Gypsy King to unify the division. He added: “If they (Joshua and Fury) sign the contract, they will punch each other for a while.

“But the thing is that everyone is expecting Usyk versus Fury for the undisputed championship, which for many years hasn’t occurred in the heavyweight division. I will even go there to watch live how they will throw punches at each other.

“I only need to beat him (Fury) then that’s it, time to retire. It’s just that I want to box with Fury for now.

“The championships unification is far way better and far more important than just fights or a title defence. I don’t want to work and box that much just for the defense itself.”

When questioned about him stating he has three fights left, Usyk replied: “Yes but they will be freak fights. I want to dedicate even more time to my children. I don’t want to leave them for a fight camp for three months.”