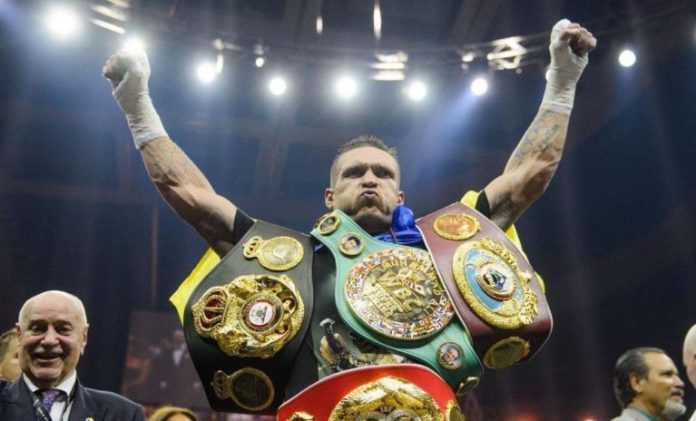 Oleksandr Usyk has drafted in former Anthony Joshua training partner Martin Bakole to help him in camp for their world title rematch.

Usyk will defend his unified world heavyweight titles for the first time against Joshua after the Brit exercised an immediate rematch clause following their September fight in London. He has left war-torn Ukraine to train for the clash, which is expected to take place in Saudi Arabia on July 23.

And he has drafted in Bakole off the back of his stunning upset victory over Tony Yoka in Paris earlier this month. He dropped the Frenchman twice on route to a majority decision victory, and is now one of the higher-ranked contenders in the heavyweight division.

Bakole has previously worked with Anthony Joshua, and his coach Billy Nelson believes he actually has the superior skillset to the two-time former world heavyweight champion. And Usyk’s team even believe that he will become champion once the current title holder has hung up the gloves.

“I was contacted during the week regarding Martin sparring again,” Nelson told Sky Sports. “I knew that was going to happen anyway because they were super happy with him on the first occasion. I think Martin gave them the best sparring he’s had. Usyk and his team respect his skill to the extent that one of his team said Martin will become a world champion in the not too distant future.

“I’d say Martin’s skillset is better than Anthony Joshua’s. Joshua probably punches harder than Martin, but Martin’s output is much higher along with his variety of punches.”

Usyk had been fighting on the frontlines in Ukraine, putting the possibility of the fight in jeopardy as fellow champions in boxing and MMA such as Vasily Lomachenko and Yaroslav Amosov opted not to travel for world title fights with George Kambosos Jr in Australia and Michael Page in London respectively.

But the bout is now set to go ahead, with an announcement imminent in the coming weeks according to Matchroom Boxing boss Eddie Hearn. And Joshua has said that he will enter the ring with a game plan for the first time in his professional career after mixing up his training set-up.

“If I’m honest with you, this is the first time in my career I’d say we are specifically working to a game plan,” Joshua said during a Q&A with Oxford Union.

“So it will all make sense after July 23. I’ve based a lot of my success on raw ability, with the right coaches, experienced coaches. But they probably knew I had ability. So, it’s just about neutering that ability. What tends to happen is, we overthink things too much when there isn’t a game plan. Because things don’t always go our way when it’s based on raw ability”.

Five things to know about the queen’s coffin procession