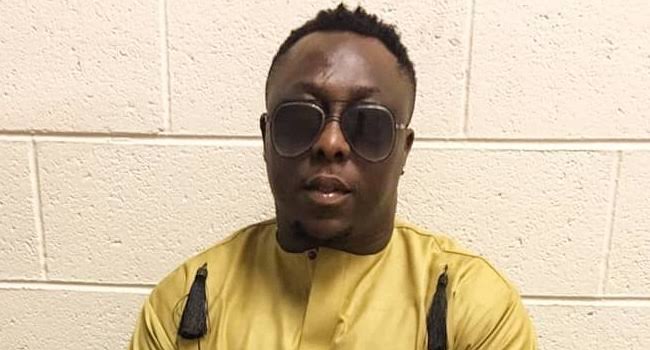 Nigerian singer, Yakubu Jibrin known as YQ, has explained how he almost lost his life in an accident.

YQ who started his career as a singer in 2003 after he formed Q-Krest, a musical group had earlier shared some pictures and a video of himself restricted in a sick bed at a US hospital.

The singer appreciated God that an ambulance and the US police force showed up in less than 4 minutes to rescue him.

He also flashback on how he was hit by an “aggressive” car owner who he said drove above the speed limit and caused him to go “lifeless.” for some minutes.

In his post were photos of himself in new clothes but still confined at the hospital.

YQ shared the accident experience on his Instagram page saying:

“This aggressive driver drove way above the speed limit and hit my car from the back in a twinkle of an eye,”

“I hit my head and chest on the steering wheel, I was unconscious for a while, but thank God for the quick response by the paramedics.

“I’m on painkillers for some days. But am still here and hope to get back on my feet in a bit. Thank y’all for your concern and prayers. Am grateful.”

Wizkid reveals title of next album

Don’t post my picture when I die — Actress Shan George

‘Like a shotgun’: Tongan eruption is largest ever recorded

Buju plans new project to be released this month