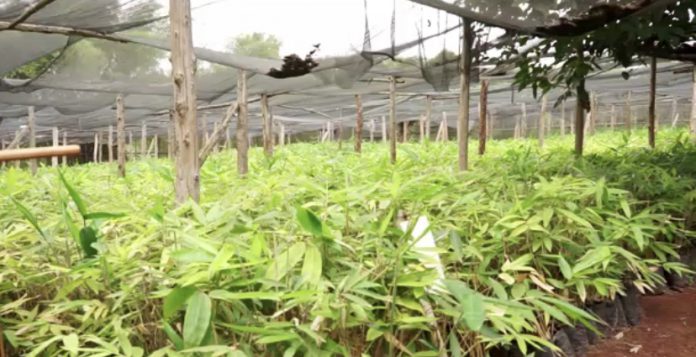 The youth in Uganda dig into dry soil under the scorching sun, preparing a bamboo plantation just outside Kampala. It was just before the World Meteorological Day which highlighted the weather extremes being experienced globally.

The group is led by Divine Nabaweesi, the founder and CEO of Divine Bamboo. It is with the woody plants that work starts for Divine, the Ugandan entrepreneur behind the innovative way of making briquettes from bamboo. She has a degree in Social Work and Social Administration from Makerere University, and “wanted to do something that would encompass both my passion for nature but also that would help in fight against climate change and deforestation”.

Her company plants thousands of bamboo to get the raw material, ultimately, it is an effort to fight climate change, in a country where 90% of the population is fully dependent on fuel wood in the form of charcoal and firewood for daily cooking needs.

“It is not enough to just tell people don`t cut down trees. People still need a livelihood, they still need to eat, they need to earn an income, so if we can give them an alternative in the form of bamboo which grows fast, in three years they would be harvesting”, says Divine Nabaweesi, CEO Divine Bamboo.

The same bamboo forest can regenerate for up to 50 years. Statistics show that lack of access to affordable clean cooking fuels is one of Uganda’s greatest environmental challenges.

Divine and her team hope to produce 100 per cent bamboo briquettes when more farmers join the supply chain. The process begins with harvesting dry bamboo of different species like Bambusa Vulgaris. It is dried and then cut into little pieces before being put into a ‘carbonizer’.

“The carbonizer is where bamboo is burned in a condition without oxygen because if you allow oxygen, you will just have ash in the end. So it is carbonized and then after that you have bamboo charcoal basically. But because we are making bamboo briquettes we then have to crush the bamboo charcoal and mix it with a binder and then it comes out from a machine called an extruder”.

Two kilograms of bamboo briquettes costs halt a dollar, and they burn longer. They are quite different from the normal charcoal. They seem a little heavier, powdery and they have a hole in them to help with the lighting process – it shouldn`t take more than five minutes to light bamboo briquettes.

Divine operates one of the largest bamboo nurseries in Uganda, producing at least 200,000 seedlings every year. Bamboo is the fastest growing woody plant in the world and according to research a bamboo forest actually absorbs over 30 per cent more carbon dioxide that an equivalent stand of hard wood trees.

“There is a growing number of people who are conscious about the environment and so they don`t feel comfortable using charcoal anymore and they are happy if they can find an alternative”, Nabaweesi says.

Started in 2016, Divine Bamboo was recently the recipient of a 25,000-euro grant from Dutch Fund for Climate and Development as stage one funding to establish potential for restoration and marketing of bamboo.

There is talk, briquettes from a more sustainable bamboo value chain could solve the large energy crisis resulting from cutting down of trees

Nigerian Bakers lament hike in diesel price as some shut down