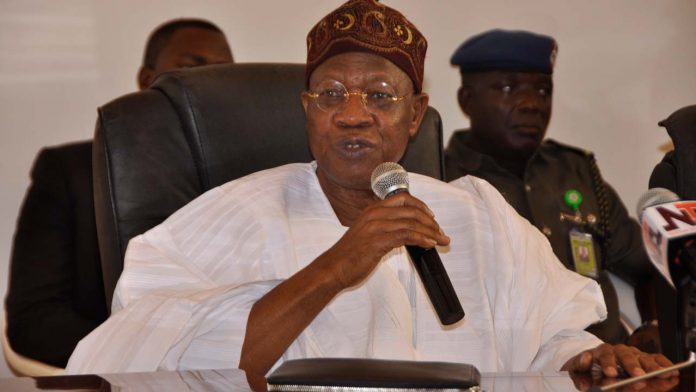 The Minister of Information and Culture, Lai Mohammed blamed the media and other unpatriotic Nigerians for Twitter’s choice of Ghana as its headquarters in Africa.

Twitter had earlier disclosed that it chose Ghana as its Headquarters in Africa for being a champion of democracy and being a country where there is rule of law among other reasons.

In reaction to this during an interview on Thursday, April 15, Lai Mohammed said the reason for Twitter’s decision is due to the fact that Nigeria has been de-marketed by the media and unpatriotic Nigerians.

He accused the media of exaggerating the challenges in the country and further added that it got worse during the #EndSARS protest. The Minister also said that this will serve as a lesson to those that de-market the country.

“The reasons cited by Twitter for citing the headquarters in Accra, Ghana is that Accra is a champion of democracy and there is rule of law in the country, among other reasons. This is what you get when you de-market your country.

“The media is more to blame for this which most times exaggerate the challenges in the country.

“At no time was this worse than during the #EndSARS protest when Nigerian journalists both traditional and new media were trying to outdo themselves in painting Nigeria as a hell where nobody should live.

“When they all conspired to vilify not just the government but the people of Nigeria. We are not saying that you should not criticise the country but be fair and patriotic. When you destroy your own house, where are you going to live?

“You can imagine the kind of job opportunities that citing that headquarters in Nigeria would have generated, the kind of visibility it would have given Nigeria but we destroyed it. It is what the insiders say about their country that the outsider will use to judge and condemn the country.”

Varane Pens Emotional Message Ahead Of Departure For Manchester United