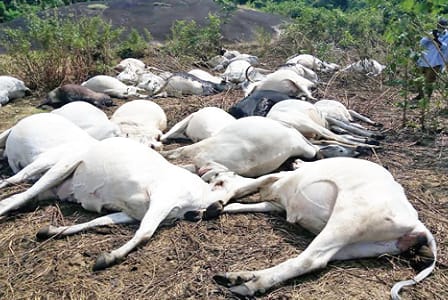 A source disclosed to The Nation that the herdsmen were seated close to the cows while others were taken to another area of the bush for grazing when lightning struck, killing over twelve of the cows.

The source revealed that the strange death of the cows caused the herders to panic and they took to their heels but later returned.

The publication included that before the day of the incident, the farm owners had at several times warned the herders to stop taking their cows to their cassava farms but they didn’t listen until the lightning strike happened.

US Summer Series: Super Falcons Versus Portugal Match Ends In 6...