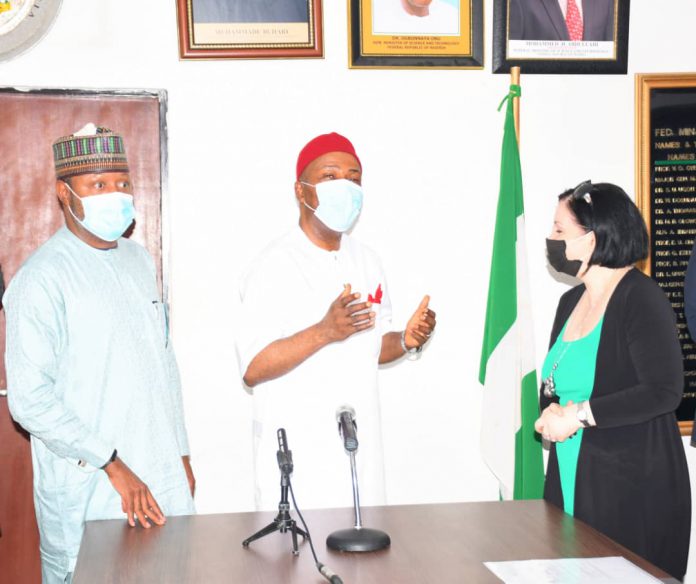 The Minister of Science Technology and Innovation, Dr Ogbonnaya Onu has said that Nigerian and The European Union will strengthen bilateral ties, especially in the area of Agriculture and research findings

Onu stated this in Abuja when the Ambassador to the European Union, Ambassador Samuela Isopi paid him a courtesy visit.

He said that Nigeria wants to be an industrialised Nation, become self-reliant so as to feed its large population, create jobs and reduce poverty to the barest minimum.

He further said that there are other areas in Science, Technology and Innovation that he believes will be of mutual benefit to both parties, adding that the nation is prepared to work with the European Union in other to make sure the desired objective is realised.

The Minister said that as a nation we need to solve some problems using STI in the areas of Agriculture, Education and security.

He reiterated that the federal government led by President Muhammadu Buhari is determined to uplift a hundred million Nigerians out of poverty in the next decade and that is why the government is investing more in STI.

In his remarks, the Minister of State for Science, Technology and Innovation, Barr. Mohammed Abdullahi implored the E.U envoy to widen the scope of their assistance to Africa on the development of STI.

He added that areas such as Nano-tech, Fintech, Engineering, Agriculture and many other areas could be invested into by the European Union.

Earlier the Ambassador to the European Union, Samuela Isopi, said that they are interested in working with Nigeria in the area of STI, as it is a pillar for sustainable development.

According to the Ambassador, one of their objectives is to have a vocal point of each team to be trained and robust their capacity.

IGAD deploys election observers to 10 counties ahead of Tuesday poll

At least 20 people arrested following operation by SAPS in Kagiso

Chad President seeks to run for Sixth Term after 30 years...

FG to evacuate Nigerians stranded in Ukraine-Russia crisis on Wednesday