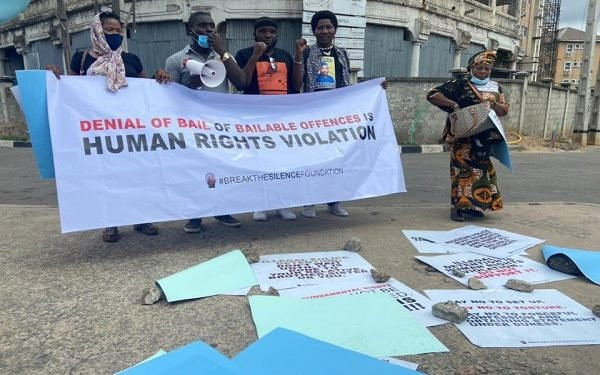 Actor Yomi Fabiyi and some other individuals staged a protest in front of the Lagos State Criminal Investigation Department on Wednesday morning, May 12, over the detention of his colleague, Baba Ijesha, who has been accused of defiling a minor.

Baba Ijesha was arrested in March after he was caught on camera attempting to defile the foster daughter of comedienne, Princess. In a video shared online, Princess alleged that he had initially raped her foster daughter when she was seven and then also attempted to sexually assault her again recently.

Yomi believes that the detention of Baba Ijesha is against his fundamental human rights and is asking the police to release him.

The protesters were seen carrying placards and banners with different inscriptions such as ‘denial of bail of bail of bailable offence is human rights violation’, ‘Nigeria police, please allow the law to dictate to you, not Iyabo Ojo, Princess and co’, ‘release Baba Ijesha’, and ‘Nigeria police must respect human rights and honour bail for bailable offence’.

Alleged coup plotters had a detailed plan of attack – State...