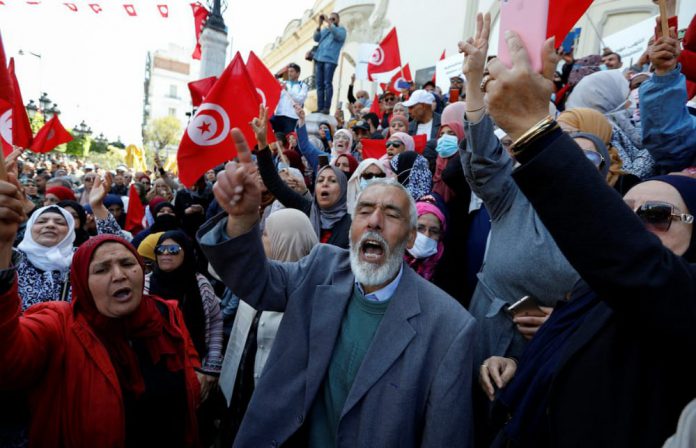 Tunisians have protested against President Kais Saied and his governance, accusing him of imposing one-man rule in the North African country after he dissolved parliament last month.

A political crisis in the country intensified last month when more than half of the members of parliament held an online session to revoke Saied’s decrees.

“We are facing a failed dictatorship that is leading the country to an economic disaster.. We will continue to protest in the streets until a coup is forced to reverse its decisions,” Chaima Issa, an activist, said.

Many members of parliament participated in the protest on Sunday, which took place with a heavy presence of anti-riot police. Protesters chanted: “The people want to overthrow the coup.”

“We will continue to resist the coup and we will not retreat. We will not accept this dictatorship,” Samira Chaouchi, one of two deputy speakers of parliament, stated.

After last month’s online session, which Saied dissolved, anti-terrorism police summoned the main opposition figure Rached Ghannouchi and other lawmakers for questioning, prompting criticism from abroad as well as at home.

A delegation from the European Parliament will visit Tunisia on Monday to urge the return of the democracy established after the 2011 revolution that ended the autocratic rule of the late President Zine El Abidine Ben Ali.

Saied, took control of executive power in the middle of last year and has ruled by decree, which his opponents describe as a coup.

He has rejected his opponents accusations and said he would hold talks on political reforms, but that “traitors and thieves” would not participate.

Saied has previously said he would form a committee to rewrite the constitution, put it to a referendum in July and then hold parliamentary elections in December.

“Divorce is not something to celebrate. It is failure” Justin Dean...