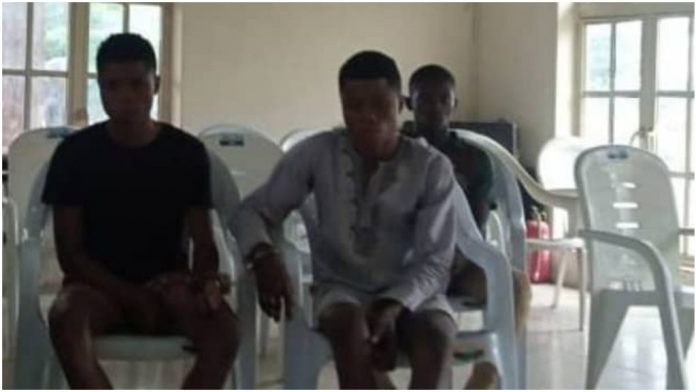 Two brothers, said to be twins have allegedly defiled a 10-year-old girl, (name withheld) in Abagana, in the Njikoka Local Government Area of Anambra State.

The suspects, whose names are Chukwuemeka and Chukwuebuka Okpe, were reportedly arrested alongside their mother, Mrs. Chinwe Okpe, caretaker of the house where the victim resided.

Executive Director, Davina Care Foundation, Mrs. Rachel Yohanna, who disclosed this to journalists on Sunday, said the case was brought to the foundation by the victim’s mother, Mrs. Benedict Sunday, a nurse.

Yohanna said the arrests were made following a report of the incident at the Abagana Police Station, after which the victim was taken to hospital where the defilement was confirmed.

She said, “She (the victim) was taken to Ntasi Centre for Sexual Assault cases at Enugu-Ukwu General Hospital, where it was confirmed that she was defiled which caused perennial tears (the area between the vagina and the anus).

“She was later accompanied by a police officer and an aunt to the suspects to the police clinic for a second test when the mother of the suspects claimed the medical result from Ntasi centre was forged, but the result still came out positive.

“The victim’s mother said her daughter complained of pains in her private part and stomach sometime in November 2021, without telling her the caretaker’s sons defiled her.

“As a nurse, she bought drugs and used a hot towel to massage her daughter’s vagina area.

“On January 16, she said she got back from work and met a vigilante group with her daughter waiting. The group said they brought back her daughter after she ran to them for safety.

“She explained the twin boys tried to defile her daughter a second time and because she refused, they beat her. When the girl reported to their mother (caretaker), she slapped her and threatened to deal with her if she did not keep quiet.

“The girl ran to the vigilante group for safety. And her mother reported the matter to the police station in Abagana afterwards.”

The state Police Public Relations Officer, DSP Ikenga Tochukwu, confirmed the incident, asserting that the Commissioner of Police, Echeng Echeng, had assured justice would be served after investigations.

“Two suspects are already in custody in a reported case of defilement at Abagana police divisional headquarters and the case has been transferred to State Criminal investigation department, Awka for a discreet investigation,” he explained.

Retract and apologize or incur our wrath – Talensi small scale...

Employers are justified to stop paying Salaries to staff who refuse...

Nigerian Children disown Mother for choosing Tiktok over them