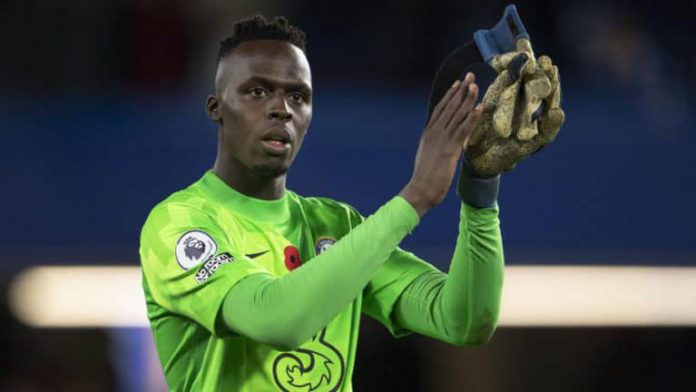 Chelsea fans have come to the defence of goalkeeper Edouard Mendy after a horror mistake which allowed Karim Benzema to seal his hat-trick in Real Madrid’s 3-1 win at Stamford Bridge.

The Senegal No 1 had very little chance of saving Benzema’s two headers in three first-half minutes in their Champions League quarter-final first leg in west London.

But after Kai Havertz had halved the deficit five minutes before half-time, Mendy would play a huge part in the Spanish giants restoring their two-goal advantage just a minute into the second half.

The Senegalese collected a ball hoofed up the field well outside of his box and chested it down before attempting to play the ball to the backtracking Antonio Rudiger.

However, Mendy badly underhit his pass, allowing the lurking Benzema to sneak in and win his duel with the German defender, who went in tamely having been booked in the first half.

The 34-year-old was then on hand to complete the simplest task of slotting the ball home from outside the area, despite Mendy’s best attempt to atone for his error with a sliding challenge.

But Blues fans have stuck by their goalkeeper – who has made 81 appearances for the club since joining from Rennes in 2020 – insisting he is still the best in the business. One fan tweeted: ‘Regardless of today’s result, Edouard Mendy remains the best goalkeeper in the world.’

Another agreed, adding: ‘Don’t let what happened yesterday [Wednesday] disrupt you from the fact that Edouard Mendy is still the best goalkeeper in the world.’

Others also showed their support for the 30-year-old, with one stating: ‘Yes he f***** up!! Buh [sic] tell me which keeper is better than him in ur team ..yes who’s better than Mendy?!!!’

Meanwhile, another user added: ‘Big mistake. A very costly one. But heads up, @edouard_mendy’, followed by a blue heart, while one other user said: ‘Mendy will always be my best goalkeeper no matter what .
‘There are days when it will go against you and also days when it will go in ur favour. Today was not for you hero.’

In fact it has been a rough week for Mendy, who presented a chance to Ivan Toney in the fifth minute of their 4-1 defeat by Brentford at the weekend, having made another hash of a seemingly simple pass to Rudiger.

Some also believed he was at fault Vitaly Janelt’s second goal and perhaps even Christian Eriksen’s strike on Saturday, but Tuchel stuck up for his goalkeeper, who had just returned from helping his country reach the World Cup by beating Egypt on penalties.

‘Actually, I have to watch it again,’ Tuchel said after the Brentford game. ‘I think it is an unthankful game for a goalkeeper. Also for him, he has a lot to process.

‘That’s why he goes and plays these tight matches – a rematch of the African Cup Final to qualify for the Qatar World Cup.
‘He does another penalty shootout and he can feel it. He is part of the team and unfortunately, he couldn’t help us like he did in the first match.’

Malema ‘using the power-hungry ANC as his punching bag’