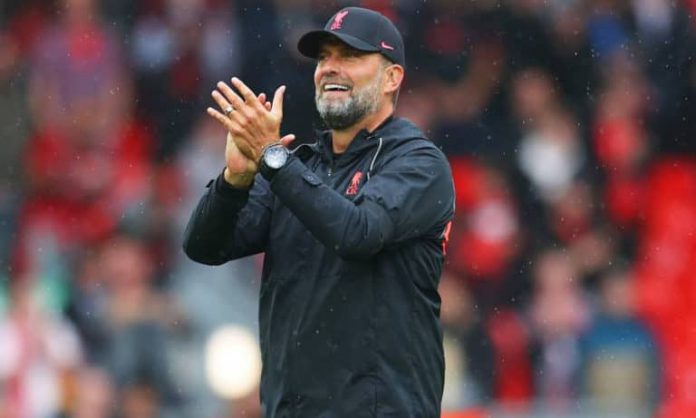 Liverpool manager Jurgen Klopp sent warnings to Manchester City as well as his own team following their win over Arsenal that provided another twist in the title race.

After City dropped points at Crystal Palace on Monday, Liverpool were looking to close the gap in the Premier League table to a single point on Wednesday as they played their game in hand. Arsenal were stubborn in the first half, but goals from Diogo Jota and Roberto Firmino broke the resistance and handed Liverpool the three points they craved.

Klopp’s players and staff celebrated on the pitch after the game as the significance of the victory did not escape them. Afterwards, though, Klopp insisted he wasn’t thinking too much about City until the two sides play each other next month. Then, he told the Blues he’s give them a ‘proper fight’.

Speaking to Sky Sports, Klopp said the key to maintaining their good form will be ignoring City, until that trip to the Etihad at least.

“The last few years, we have pushed each other to insane levels. It makes each game harder, you can enjoy that but you need to be ready for the intensity.

“I don’t think it is a problem for a human being every three days to be focused on what you do, but then comes in the physical part. We don’t fight City, we play City in three or four weeks and we will give them a proper fight then but apart from that we are in a good moment, in a good mood but we know the only way we can do it is to dig really deep.”

In a warning to his own players, Klopp then told Liverpool not to read too much into their good form that has seen them win nine games in succession. “Momentum is the most fragile flower on the planet,” he added.
“Someone steps on it and then it’s gone. I’m not a big friend of momentum. Just find a way to get through it. I would prefer to be 20 points in front.

“A rhythm is good but a rhythm is playing every four days, three days, it is a rhythm but it is an intense one, we are not complaining, we want to be in all competitions. It is fine but the opponents are all quality and they are really different.

“We constantly travel, we go here, we go there. I don’t complain, we don’t complain, it is just how it us. You wake up in a different hotel and someone tells you where the restaurant is and you try and remember the number of your room.”