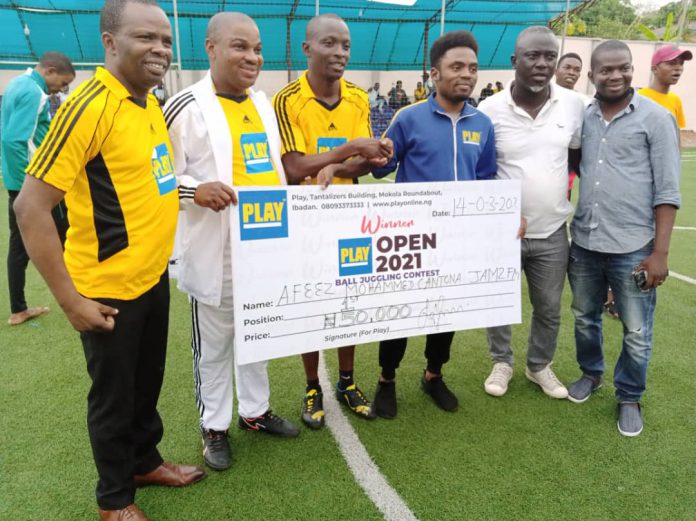 The Chairman Oyo State Chapter of Nigeria Union of Journalist (NUJ) Comrade Demola Babalola has lauded the management of Play and Device Limited for sponsoring a ball juggling competition that was tagged: Play Open Ball Juggling Contest for media practitioners in Oyo State.

Babalola while speaking with newsmen after declaring open the sporting event yesterday at Pioneer Sports and Leisure Club, Jericho Ibadan described such an event as good means for the ever-busy media practitioners to unwind while commending the Play and Device Ltd for bankrolling it.

Speaking in the same vein, the chairman of Sports Writers Association of Nigeria (SWAN), Oyo State Chapter, Comrade Niyi Alebiosu also called on corporate bodies and well-meaning individuals to partner the SWAN in propagating grassroots sports development while thanking Play for deeming it fit to engage sports writers in a competition that will help their physical fitness.

Meanwhile, Hafeez Mohammed Cantona from Jamz FM emerged winner of the contest, scoring 332 points to edge Ike Yussuf of Yesma Radio and Abass Ishola of Space FM to second and third spots respectively, as the duo recorded 303 and 301.
The winner of the event got a cash prize of fifty thousand naira while the first and second runners up received thirty and twenty thousand naira respectively while Mr. Moradeyo Akinade of Dayo King Ltd also gave other contestants a decoder with subscription of GOTV each as consolation prizes.

Meanwhile, Mr. Christopher Aderibigbe who represented the sponsor, Adedayo Adeboga, the CEO of Play and Device in his speech promised to make the event an annual one while expressing the delight of his firm to associate with the media practitioner in Oyo State.
“We organized this event for sports journalists as a way to appreciate their efforts which involved gathering authentic news at late hours and striving to satisfy the yearnings of sports lovers through their various reports.

“And the saying goes that ‘all work and no play makes jack a dull boy’, so we felt let organize a competition which is first of its kind in Oyo State, to bring all sports’ writers together to have fun and network”, Aderibigbe noted.