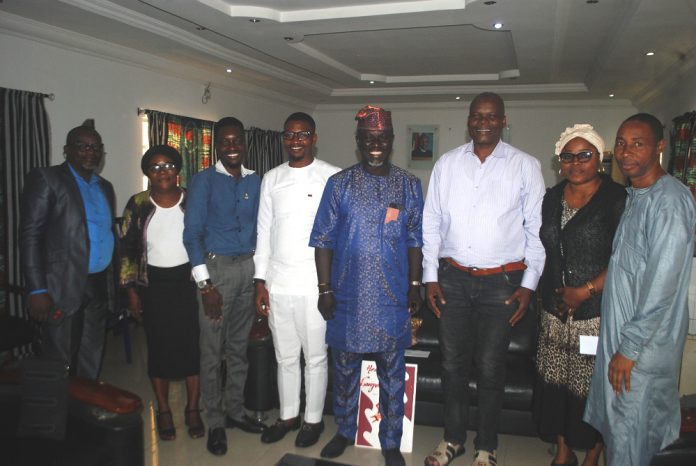 The Oyo State Commissioner for Information, Orientations and Cultures, Dr Wasiu Olatunbosun has called on sports journalists in the state to support Governor Seyi Makinde in his efforts at enhancing sports in the pace setter state through mass provision and upgrade of facilities.

Playing host to the Executives of the Oyo State Chapter of the Sports Writers Association of Nigeria in his office on Monday, Dr Olatunbosun assured that the ongoing upgrades of stadia across all the zones in the state will soon be completed.

“I can say with certainty that Governor Makinde means well for youths of Oyo State. That’s why he is committed to youth empowerment and the development of sports in the state. He has embarked on mass upgrade of all sports facilities in the state to make it more conducive for our sports men and women to develop their skills. All that is needed now is for you, sports journalists to support the Governor in his efforts at carrying out his good programmes”, the Commissioner said.

Dr Olatunbosun, who also congratulated Oyo SWAN leadership on their victory over those who tried to unseat them, assured the Association and the Nigeria Union of Journalists of continued support from his ministry.

“I congratulate SWAN in Oyo state for weathering the leadership storm that rocked your Association a couple of years back. And I also congratulate your Chairman, Niyi Alebiosu on his recent appointment into the NBBF Reconciliation Committee. I was very happy when I heard it because I saw it as a thing of pride and glory for our dear State. We in this Ministry are happy to associate with you and will continue to support you and NUJ with all we have”, he promised.

Earlier, the Chairman, Oyo SWAN Mr Niyi Alebiosu who led the delegation on the courtesy visit to the Commissioner congratulated Dr Olatunbosun on his re – appointment as the Commissioner in the Ministry, attributing this to the recognition of his excellent performance.

Mr Alebiosu solicited the assistance of the Commissioner to successfully organise the forthcoming 2021 Oyo SWAN Week.

The Oyo SWAN Chairman, while noting that Dr Olatunbosun stands out among other Commissioners serving in the present administration in Oyo State in terms of prominence and agility, charges him to use his closeness to Governor Makinde, to prevail on the State Chief Executive to resuscitate female football in the state.

“Honourable Commissioner, I want to implore you to please move it at the state executive meeting that female football is resuscitated in Oyo state. It’s disheartening that while other South West states as Lagos, Ondo, Osun have female football teams featuring in domestic league, Oyo State which used to have two teams, no longer has any. Nito Queens and Tewo Babes which used to represent the state in national competitions have gone into extinction. We want them back sir. We urge you to ensure that female football is brought back to Oyo State”, Alebiosu tasked the Commissioner.

The State Commissioner for Information, Orientations and Cultures hosted the Oyo SWAN delegation in presence of the Permanent Secretary in the Ministry, Dr Bunmi Babalola, its Directors including Mr Tunde Ajibike, Alhaja Bukola Bakare and Mr Rotimi Babalola, who is a former Secretary of Oyo NUJ as well as the newly elected Secretary of the NUJ Information chapel Mr Olamide Adeniji.