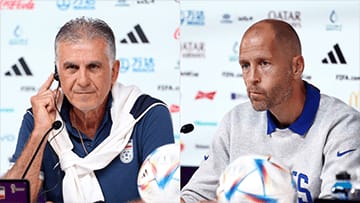 If there is any fixture at the ongoing World Cup that will attract interest even among none football followers, it is the match-up of Iran and the US.

This is owing to the diplomatic tension surrounding the two countries. Even ahead of today’s match, Iran had advocated for the kicking out of US from the World Cup.

Similar attention followed the encounter of the two countries at the France ‘98 World Cup. That match played on 21 June 1998 was won 2-1 by Iran.

It was described as the “mother of all games” and the “most politically charged game in World Cup history.

It was also Iran’s  first ever victory in the history of the World Cup.

Both meet at Al Thumama Stadium with a guaranteed place in the FIFA World Cup 2022 knockout stage awaiting the winners but elimination looming for the losers.

IR Iran, now second in Group B after dramatically defeating Wales 2-0, are a point and a place ahead of the USA, who, after two draws, will be out unless they win.

A draw will keep IR Iran in the competition unless Wales simultaneously defeat England.