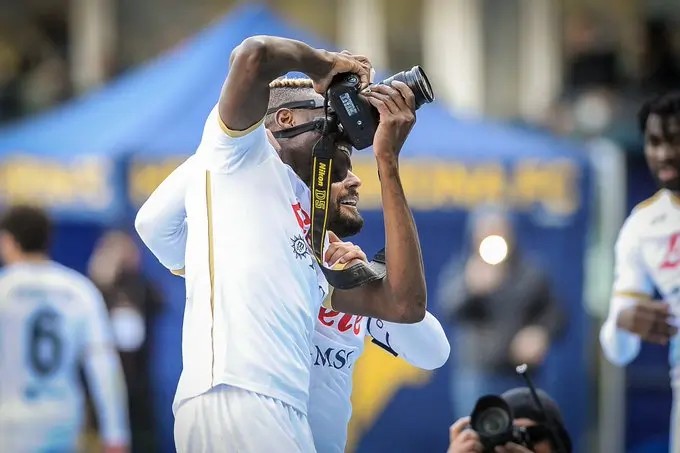 The agent of Napoli star Victor Osimhen has insisted that there are no problems with the Partenopei and that rumours linking the striker with Arsenal and Manchester United is not a priority now.

“There are no problems; Victor has already proved his close bond with this club,” Roberto Calenda, one of his agents, told Radio Marte.

“I don’t want to waste time talking about this, the situation is ridiculous. Just move on and talk about football.

“Osimhen is a young striker and with the right tips, his development is natural. Luciano Spalletti improves the players he works with. Everyone is happy about how things are going, Napoli are a precise choice for the striker’s development, as a man and as a footballer.”

The Partenopei dream of winning the third Serie A title in their history. The first one since 1990. They are just one point off leaders Milan with seven games remaining. Osimhen has been linked with a move to Arsenal or Manchester United at the end of the season, but the striker’s future is not a priority at the moment.

“Osimhen is focused on the pitch, he wants to win and he is showing the right commitment. He plays for a strong team and journalists need to fill the papers’ pages,” he said.

“Even somebody who knows nothing about football would name Osimhen among the top strikers. He is a Napoli player and he will face seven finals now. The focus is all on the current campaign.”

Osimhen has scored 15 goals in 25 appearances across all competitions this season. According to Il Corriere dello Sport, Napoli rejected a €100m bid from Newcastle during the January transfer window but would sell him in the summer for €120m.

Ghana has banned exportation of foodstuff to ensure food security –...