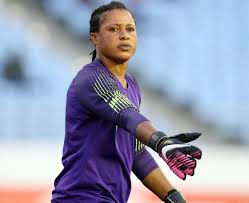 Nigeria’s Super Falcons goalkeeper Tochukwu Oluehi was not happy about the performance of the team against the Raggae Girlz of Jamaica but hope the team will improve in the next match against Portugal.

Jamaica recorded a narrow 1-0 win against Nigeria at US Summer Series opener in Houston Texas.

Spain based Oluehi who joined the camp hours before the game was in goal for that encounter and knocked herself for conceding the kind of goal she conceded after working so hard.

“After doing my best, I conceded a silly goal, I was not happy but I did my best.”

“I will give the defenders 50 percent, they did well. Most of them are new in the team and with time they will be better.”

“We’ve seen the other game, we have to go back home and correct our mistake to make sure we win against Portugal,” she said.

June 12: We Should Be United In Defence Of Democracy –...

“Inconsistency is the bane of Nigeria League” … Ex-international